Lazarus Rising: A Personal and Political Autobiography by John Howard.

Lazarus Rising: A Personal and Political Autobiography by John Howard.  Hardcover book published by Harper Collins 2010, 711 pages with some colour and black and white photographs. 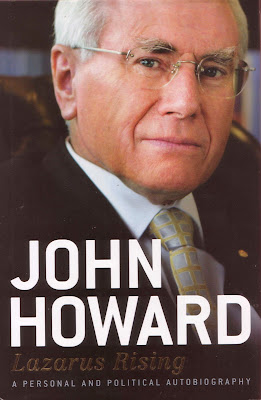 John Howard.  I never voted for him (or Lazarus), but enough people did vote for him and he was able to hang on to the Prime Ministership of Australia for eleven years (… John Howard not Lazarus).  That means that people voted for him at more than one election.  Maybe it was his charm… his charisma… his good looks(?)… his politics… or maybe it was his love of all things Don Bradman*, that enabled him to cling to the top job for so long.  As I didn’t vote for him and obviously have some** issues with the bloke and his party, it’s a bit hard for me to be unbiased… a bit like Geoffrey Blainey who wrote:

“In the end, John Howard will be seen by vast numbers of Australian as one of the great prime ministers.” (From the back of the dust jacket.)

Howard and his party were in control until 2007 at which time the people of Australia decided it was the end of his innings and well and truly bowled him out at that years election.  Like all ex Australian Prime Ministers there had to be a biography at the end of his long…long… way too long… career.  This is not just an Australian thing, they do it all over the world, so our Johnnie had to do it as well.  The book starts at the beginning (“Early life and the Fraser Government”) and finishes at the end (?).  He was fairly quiet after he lost the 2007 election and I guess this book dwells on what he considers the high points of his career: Tampa, Children Overboard, Work Choices, Dr Haneef… all of which are listed in the index.  But let’s be fair on the bloke, he did tighten gun control… and ummmm… well ummmm… Geoffrey Blainey could probably say a few nicer things than I could possibly make up, or maybe the author of this book might be able to shed some light on some of the nicer legacies that Howard has left for us.


So who could possibly be interested in this book?  Well obviously not me.  I have firmly set biased opinions that wont be budged.  I do firmly believe that anyone who voted for him and his party again and again and again, could hold an interest and as I mentioned above, there were quite a few of them.  This is the second copy of this book that I have recently found and I’ve got a feeling this wont be the last.

* Australian sportsman, worshiped by John Howard.
** More than one.
Posted by robin at 2:51 AM