The Economic Approach to Environmental and Natural Resources by James R. Kahn. 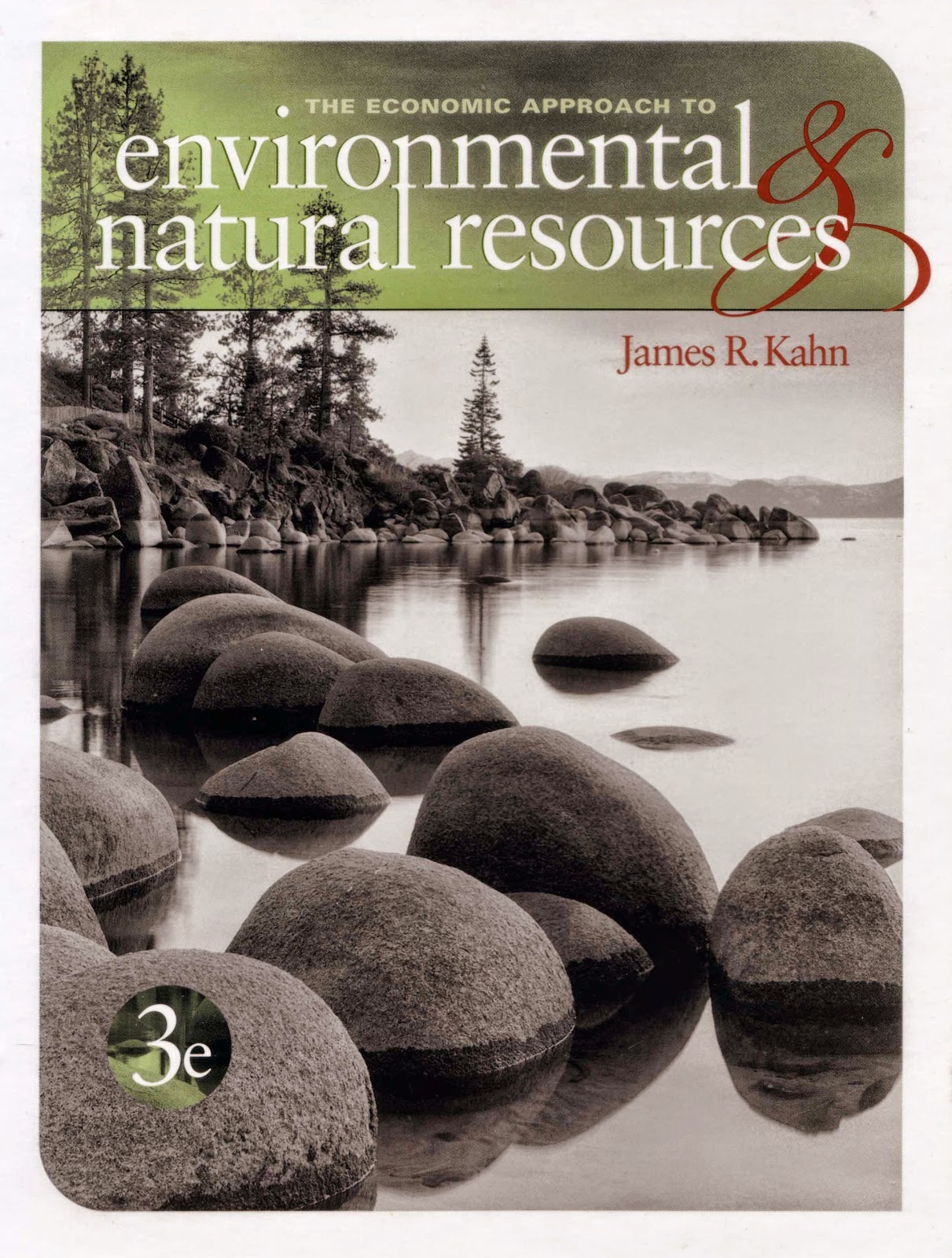 “This innovative, cutting-edge book takes a hands-on approach to the origins of environmental problems, their economic consequences, and the policies that address them. Economic Approach to Environment and Natural Resources with Economics presents environmental economic theory and methods in the first five chapters and then applies and reinforces them with illustrations and applications in the subsequent chapters. No other book provides a stronger link between theory and applications.”

Not only do you get a book with this purchase but you also get complimentary (...no, not steak knives...) access to South-Western's Economic Applications Website. All you have to do is go to the website and enter the access serial number that came with the book... whoops... hang on a sec... there's no serial number with this book... at least none that I can find. Luckily you can still purchase access at the website even if you don't have the number. Mmmmm... it's not very clear how much this is going to cost and somehow I think it's going to be big $$$. Still, the book does have 638 pages packed full of economic approaches to environmental resources with or without web access.

This is a perfect time of year to be selling a book such as this. University/tertiary students will soon be back at their various campus's studying ferociously and eagerly wanting to save a few $ on text books... as beer is not as cheap as it once was. I can only assume that the students studying economics in relation to environmental and natural resources will get the whole concept of second hand books as not only are they cheaper, they are less costly to the environment and help preserve some of those natural resources (ie forests) that need preserving. So far they haven't... but it's early days yet and many a student is still yet to contemplate the overwhelming financial burden of purchasing expensive text books. Hopefully they will take the plunge soon(ish).
Posted by robin at 11:40 PM No comments:

The Gentle Art of Persuasion by Chester Porter QC. 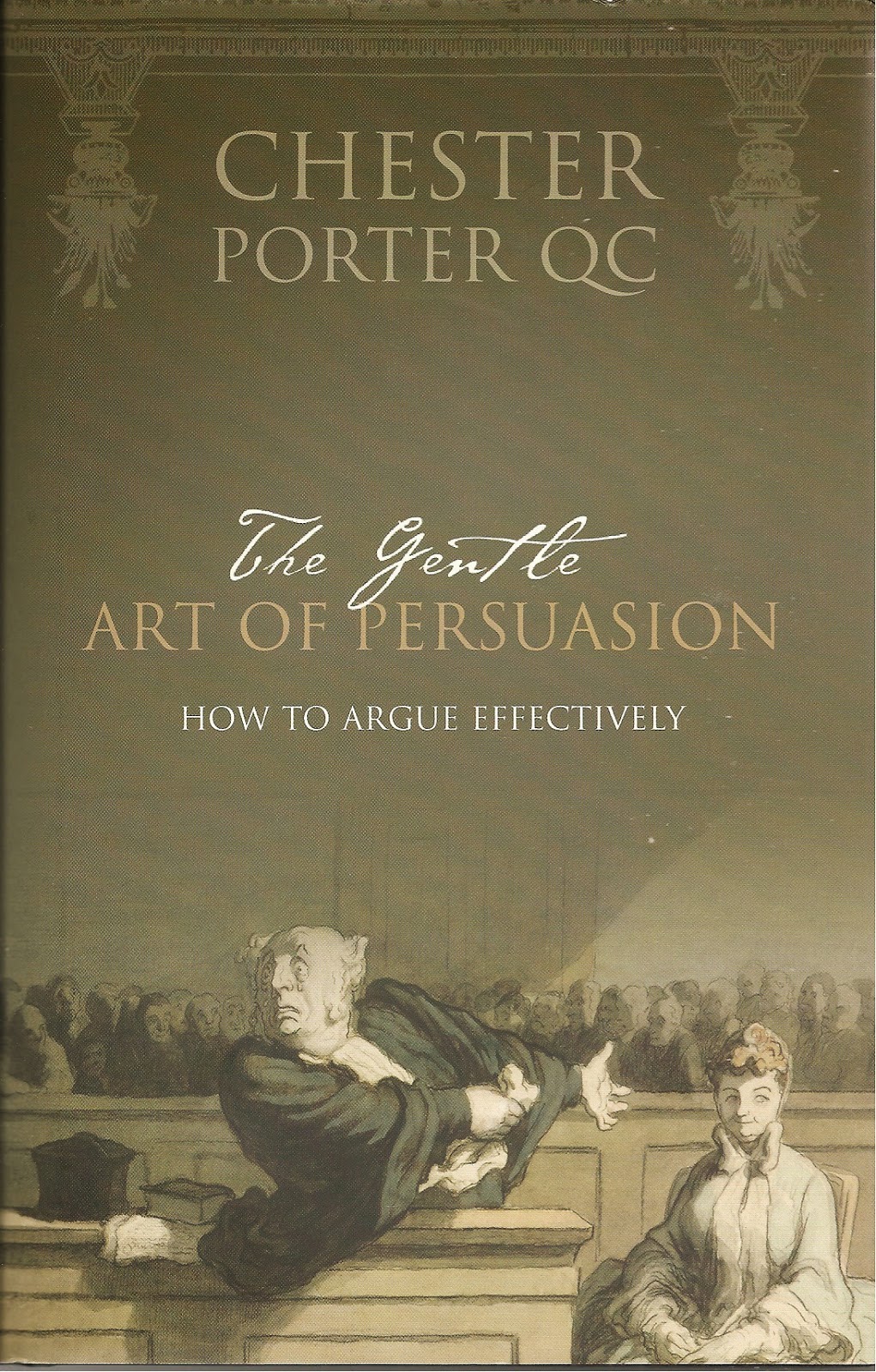 “Much of life is spent in arguing, domestically, at work, professionally, or it just happens that way. Most arguments are futile wastes of time. Neither the participants nor the audience learn anything. Between men in crowded pubs arguments can even lead to physical fights, usually for no purpose. Yet intelligent argument is often the only sensible way to advance our many causes, to spread knowledge and to achieve progress. It is one thing to sound impressive, to devastate the opposition, to make a great impression. It is by no means the same thing to change people's minds, to convince them by your arguments. Persuasion is achieved more often than not by quiet, rather than devastating argument. Learn from someone who knows how to get his point across in the most effective, and charming, way.”

I've had a few arguments in my time and yes I agree with Chester that in retrospect most of them have been futile wastes of efforts. Time and time again I get to the end of these active 'discussions' and realise i've just wasted another X amount of time to no purpose at all... Sometimes though, the point is that there has been a discussion. I don't want to agree with everyone else on politics, religion, the state of the world etc. I wouldn't be me if I did. But sometimes it's interesting to get another perspective... that is if there is another perspective!

Chester Porter is obviously acquainted with the art of persuasion having worked in the legal profession for most of his working life. Apparently he was known as the 'The Smiling Funnelweb' which would have been enough to scare the shit out of anyone who would have come up against him in court. I don't know how gentle funnelweb spiders are but for some reason I think they are not very open to quiet discussion, but more of a 'devastating argument' type of spider... which sort of gives a different meaning to the sentence,

Learn from someone who knows how to get his point across in the most effective, and charming, way. 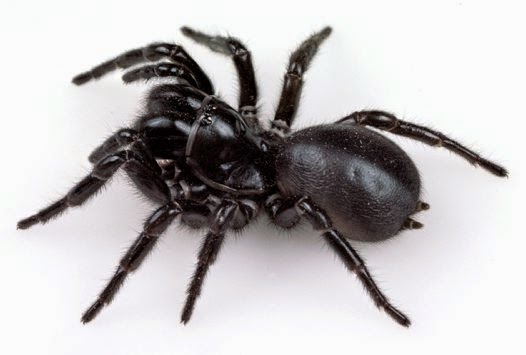 I like this book and can see the benefits for many people, including myself, in being able to gently persuade as apposed to heatedly argue. Now all I need is to find people wanting to be persuaded.
Posted by robin at 10:52 PM No comments:

Catherine the Great: Love, Sex and Power by Virginia Rounding. 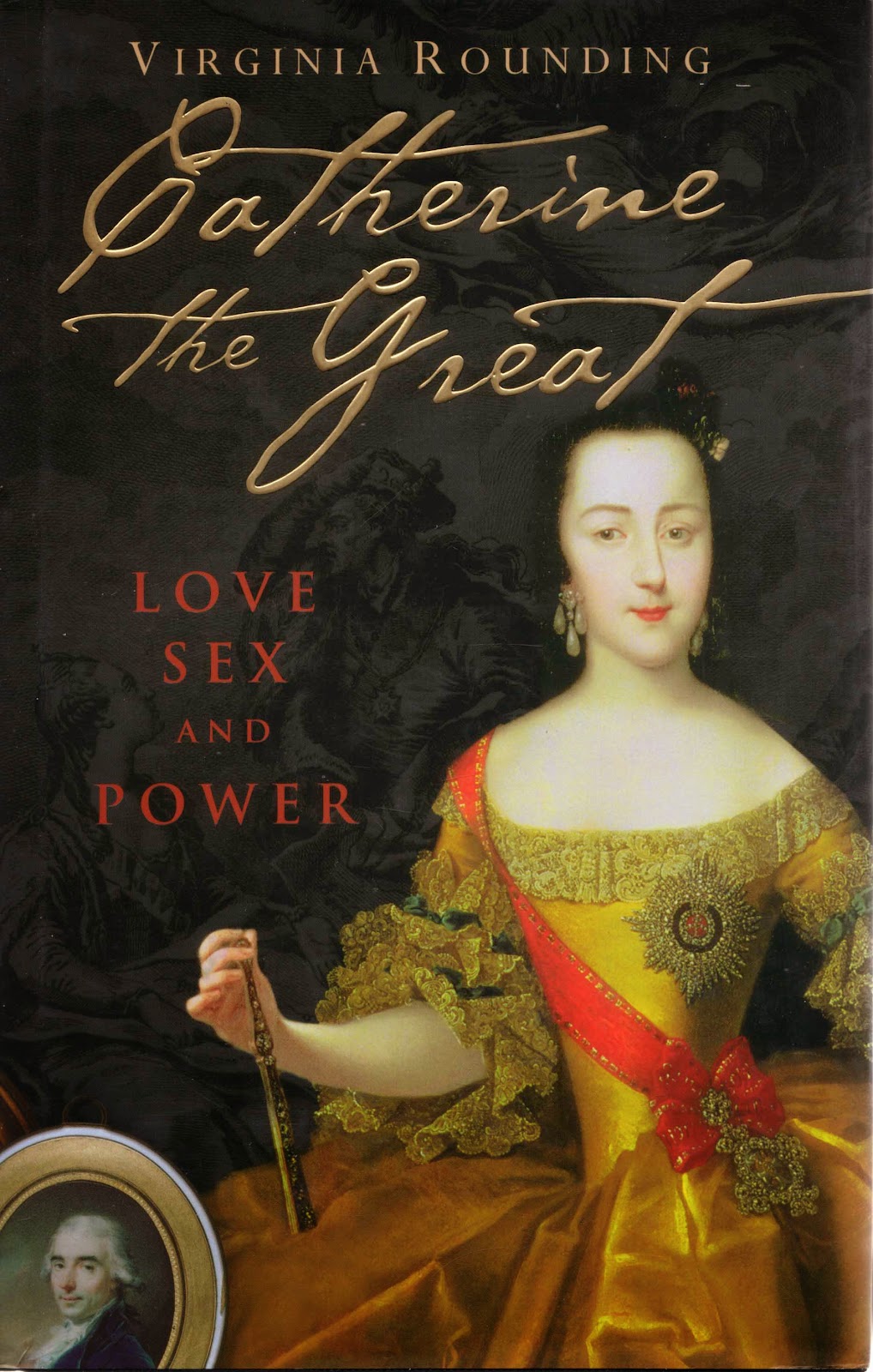 “Dutiful daughter, frustrated wife, passionate lover, domineering mother, doting grandmother, devoted friend, tireless legislator, generous patron of artists and philosophers — the Empress Catherine II, the Great, was all these things, and more. Her reign, the longest in Russian Imperial history, lasted from 1762 until her death in 1796; during those years she built on the work begun by her most famous predecessor, Peter the Great, to establish Russia as a major European power and to transform its new capital, St Petersburg, into a city to rival Paris and London in the beauty of its architecture, the glittering splendour of its Court and the magnificence of its art collections. Yet the great Catherine was not even Russian by birth and had no legitimate claim to the Russian throne; she seized it and held on to it, through wars, rebellions and plagues, by the force of her personality, by her charm and determination, and by an unshakeable belief in her own destiny. This is the story of Catherine the woman, whom power alone could never satisfy, for she also wanted love, affection, friendship and humour.”

So how great was Catherine? Unfortunately I'm not really up with Catherine's overall performance, so i'm not really sure how great she was... and I might be on the complete wrong track with the reference to her Greatness as it may have been something that she married into. As you have probably surmised, Russian history from this period is probably one of my weaker points of knowledge, yet somehow, and rather strangely, I knew that:

I have no idea how I know this stuff or when it entered my knowable knowledge but it is there and that it why this book is now here.

By all accounts (including the 566 pages in this book) Catherine is an important figure in Russian history and was someone who enjoyed having power and influence. I gather she was a royal you didn't muck around with or even try to muck around with... sort of like Vladimir Putin... but with more hair and jewelery. Russia has a history that is long and eventful and Catherine's time at the top job is another part of a history that keeps on giving.
Posted by robin at 11:00 PM No comments:

The Muslims Are Coming!: Islamophobia, Extremism, and the Domestic War on Terror by Arun Kundnani.

The Muslims Are Coming!: Islamophobia, Extremism, and the Domestic War on Terror by Arun Kundnani. Paperback book published by Verso 2014, 329 pages. 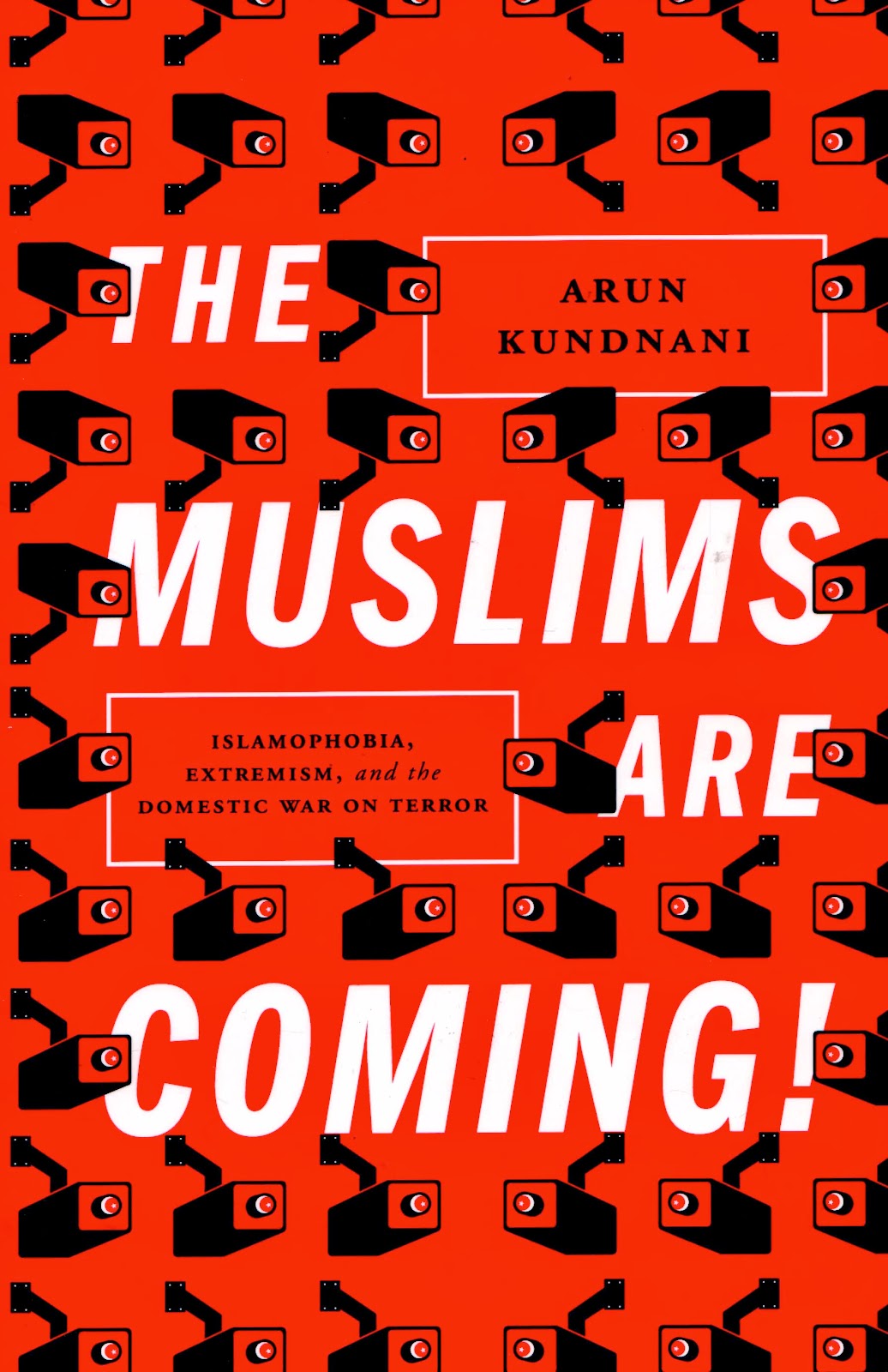 “Following the killing of Osama bin Laden, polls showed that the public was more anxious about terrorism after his death than before. The new front in the War on Terror became the “homegrown enemy,” domestic terrorists who are the focus of sprawling counterterrorism structures of policing and surveillance in the United States and across Europe. Undercover officers and informants have spied on 30 mosques in New York alone. Surveillance has grown explosively—at least 100,000 Muslims in America have been secretly investigated in recent years—and in incredible detail—counter-terrorism agents have a file on every Moroccan taxi driver in New York City. British police compiled a secret suspect list of more than 8,000 al-Qaeda “sympathizers”, and included almost 300 children 15 and under on its list of suspected extremists, while MI5 doubled in size in just five years. Based on several years of research and reportage from Texas and New York to Yorkshire, and written in engrossing, precise prose, this is the first comprehensive critique of counter-radicalization strategies. The new policy and policing campaigns have been backed by an anti-extremism industry of newly minted experts, and by examining the ideas of even liberal commentators like Martin Amis, Paul Berman, and Timothy Garton Ash, the book also looks at the way these debates have been transformed by the embrace of a narrowly configured and ill-conceived anti-extremism.”

The world is a sad and complicated place. I decided to write about this book at this point in time for obvious reasons, but I don't really know what to say other than these issues are complex and difficult at times to fully grasp or comprehend particularly if one isn't actively involved*. This book raises some interesting questions and reading through the publishers blurb, I can't help but think about the people who aren't being watched or investigated, that is those that do want to do harm... and more importantly those that have done harm. It's always a few bad apples who give the rest a bad reputation which I guess is why Islamic communities around the world are being so vocal at this point in time. Despite 3 million people marching through the streets of Paris, I don't think this will stop the bad apples from doing bad again. You can have as many dodgy world leaders (there were a few there) holding hands in unity (a few were obviously not standing next to each other), but I didn't see any ISIS leaders there and by the information at hand, it is these people who need to hold hands with the rest of the world instead of shooting at it.

*There have been no terrorist attacks here in Clunes in the last 142 years.
Posted by robin at 12:58 AM No comments: 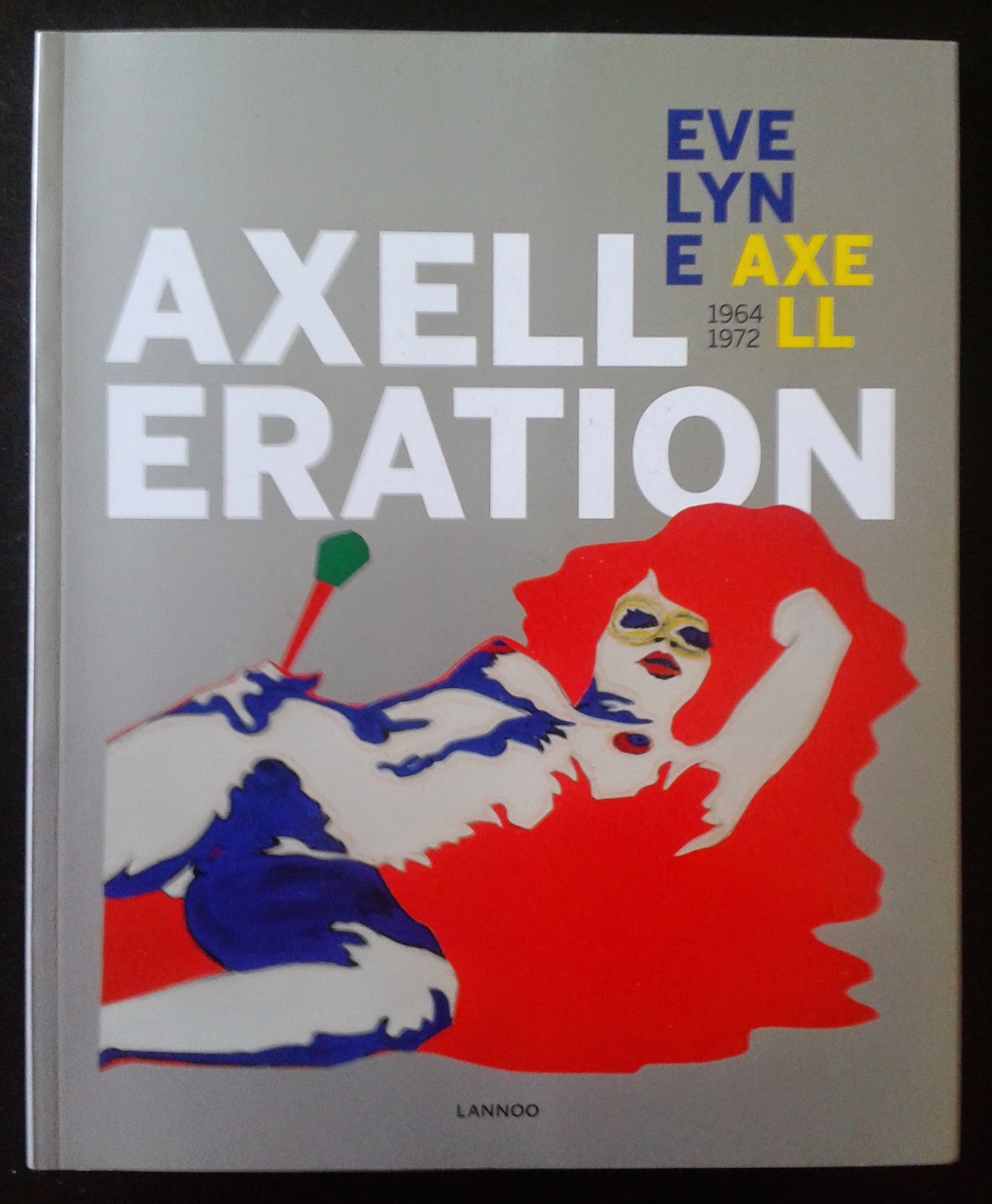 Pop Art, as with many art genres of the 20th century and after, is one of those movements that from my experience can easily divide a room. I've encountered the anger and disgust of those who believe that anything beyond the early twentieth century, is not only bad art, but not art at all. I have a differing opinion to these nay sayers on the subject of modern artistic endeavors. Yes, I think that art is art... that includes Pop Art. I don't have to like it (… though I do have an enthusiasm for Pop Art), but that doesn't mean that it isn't art. Because of this outlandish(?) and at times unpopular opinion, I've often been put on the spot to justify art works that i've never seen and therefore obviously have no opinion about. Whether art works are seen or unseen, I tend to defend the right to make art in whatever form or style, despite not being an art critic or artist, and having a poor knowledge of modern art overall. I do have opinions... some of them quite strong... but this does not make me an expert and certainly does not make me a judge.*

It's a bit like music... actually it's exactly the same as music... you don't have to like everything (I certainly don't) but can have some sort of appreciation for something that whilst not to one's particular taste, is still a piece of music. It mightn't be something that I like or fully comprehend, a bit like quite a bit of this world, but that doesn't mean it's not music. Art is the same. Just because I don't like it, doesn't really mean much in the greater scheme of things. 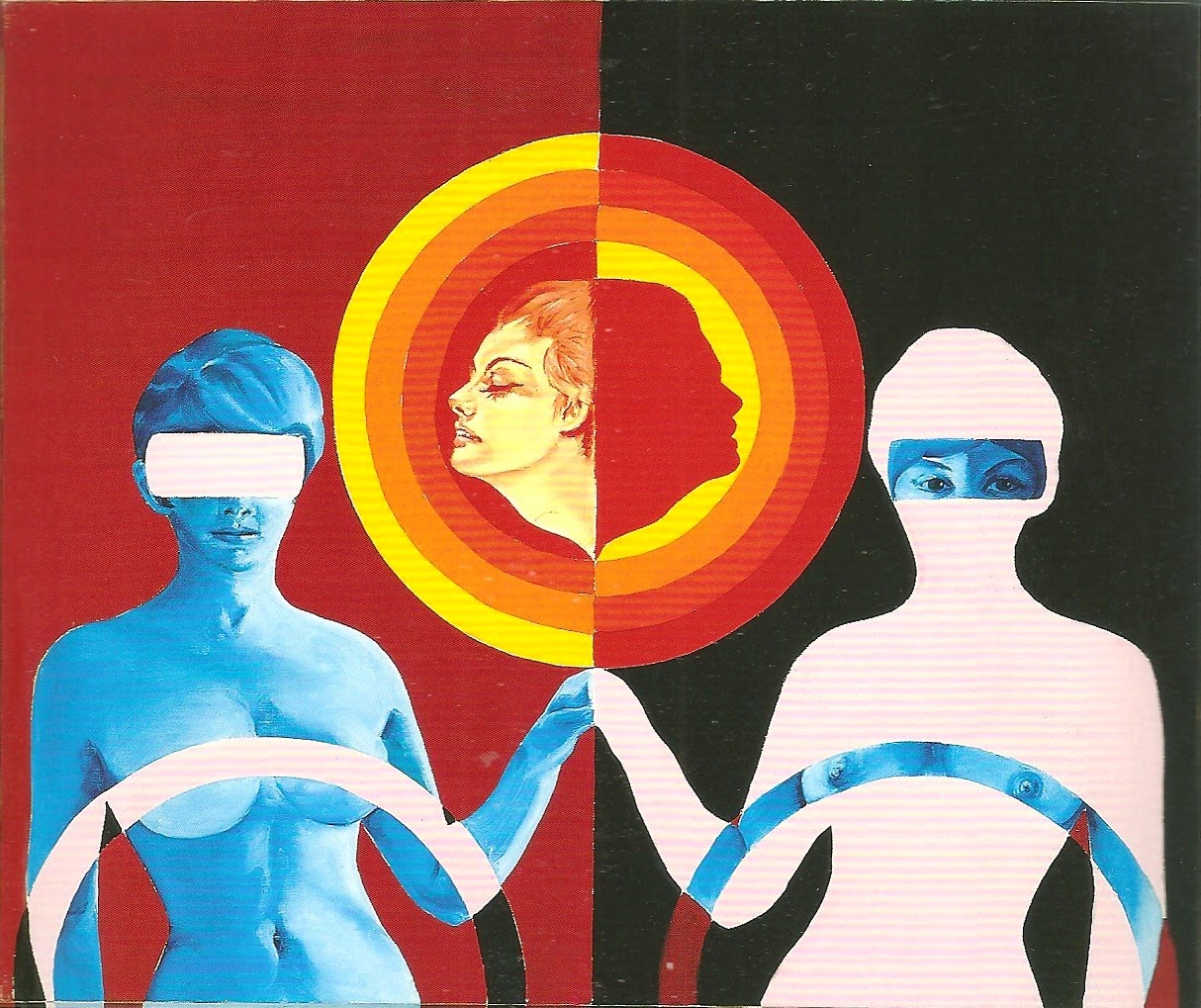 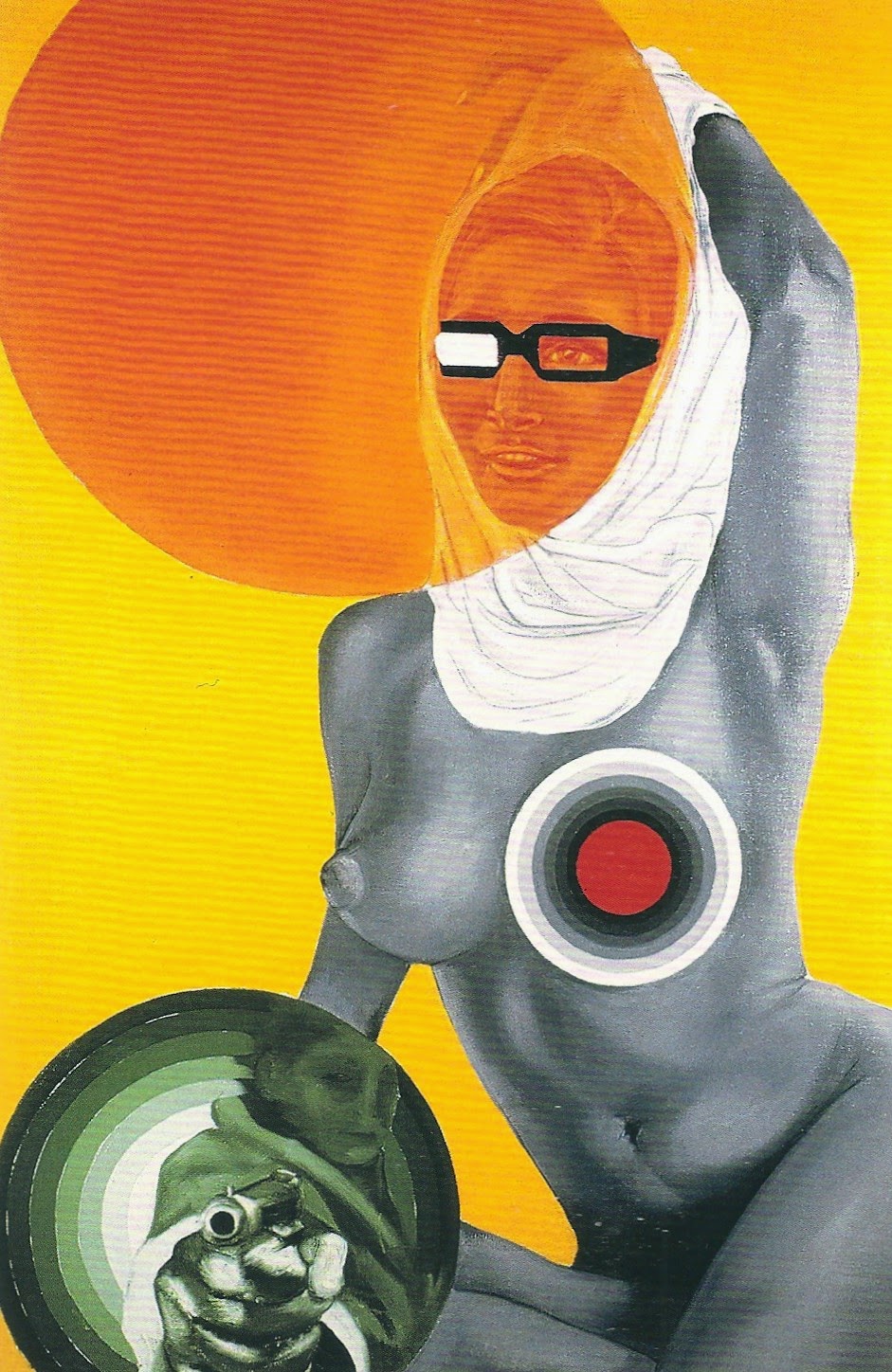