Road to Rembetika: Music from a Greek sub-culture songs of love, sorrow and hashish by Gail Holst.

Road to Rembetika: Music from a Greek sub-culture songs of love, sorrow and hashish by Gail Holst. Hardcover book published by Anglo-Hellenic Publishing 1977, 176 pages with black and white photographs and one black and white map. EX LIBRARY 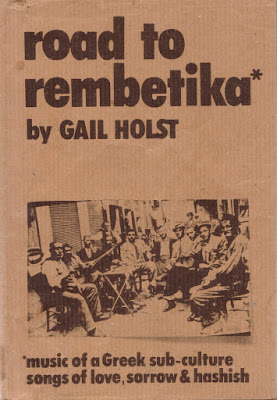 As some of you may have noticed, I like music... and all sorts of music. Throughout my life i've considered music to be an adventure and something that should be explored. Over the years I've found that sometimes i hear something new and then consciously make a decision not to pursue that line of sonic exploration, choosing instead to venture elsewhere within the plethora of auditory worlds. Sometimes I dabble within a genre, leave it and then return many years later to further pursue my explorations. Once such genre is Rembetika.


I don't speak Greek and I don't smoke hashish, yet Rembetika has piqued my interest over the years to the point that I own a few CD box sets and a few individual discs, all of which contain vintage recordings as apposed to newer versions... and all of which I haven't listened to in recent years. Listening to the youtube clip above has reignited my Rembetika fire and i've got a feeling that tomorrow may be Rembetika day here at Huc & Gabet... which is a great way of celebrating Australia day.

… oh yeah, the book. I haven't found many/any books specifically about Rembetika before this one, so when I saw it, I figured that there was a high probability that this book would meet my criteria as being a “book of interest”... and without question it is a book of interest, but so far i've had no takers. What's wrong with you all...
Posted by robin at 10:30 PM No comments: 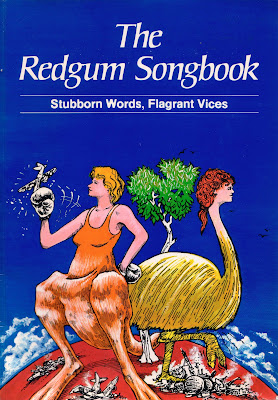 I've dabbled in music books for a few years now with varying degrees of success... Actually, I can't remember selling any of the many music books that I have thought would easily sell. Maybe people don't play music anymore or maybe there's some secret squirrel thing about music books, that i'm totally oblivious to. I still think that Leonard Cohen, Frank Sinatra and Kasey Chambers would be sellers as apposed to shelf fillers, but this doesn't seem to be the case. So why have I picked up a book containing the music and lyrics of Redgum who achieved legend status with their song:

This was a big hit here in Australia (… in case you didn't know...) and is still part of the Australian music psyche. With this in mind I didn't hesitate in picking it up and offering it for sale.

There is just one little thing about all of this. The Redgum Songbook was published before they had recorded 'the' song, therefore it does not include what is undeniably their biggest hit. I was aware of this at the time of purchase, but still think it is worth a go as people that are into Redgum and/or Australian folk music won't necessarily be focused on 'the' song. I personally remember that Redgum were around before reaching mega commercial success. I even went and saw them play at Melbourne Uni back in the days when Melbourne Uni would have great gigs every so often (...I wasn't 19). I also remember not enjoying them as much as some other bands that I had seen previously and in retrospect... it wasn't really my thing... but the concert was packed with fans who were more than happy listening to a pre 'I was only 19' Redgum. It is with this in mind that I figured that The Redgum Songbook would have an audience.  Another thing i should mention is that this book is not that common and i'd ever go so far as to describe as quite rare.  I think it's a great find and it will sit nicely on the shelf next to Kasey Chambers.
Posted by robin at 11:08 PM No comments: 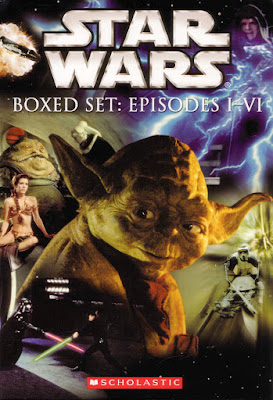 In case you live on planet Mars and haven't heard the biggest news this side of the Klingon Empire, there is a new Star Wars film currently smashing all box office records... which means it's making a shit load of money. Is there a better time than now to have a 6 volume box set of novelizations of the first films up for sale? No there isn't... at least I don't think there is. Maybe if we had a Wookiee invasion or if we found out that those fluffy teddy bear things from the third film (which ended up being the sixth film) were real, then there may also be a certain interest in 6 novelizations of these blockbuster movies... and who knows, I may even make some money on the whole Star Wars phenomenon. 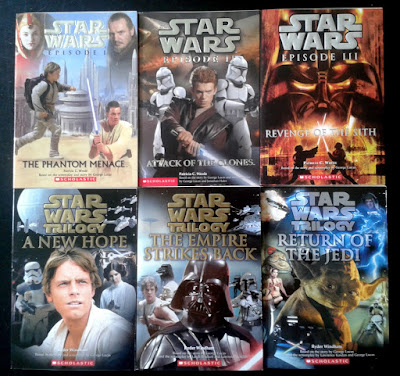 I read somewhere that there are a few Star Wars titles (not movie novelizations) that have been removed from our galaxy, due to changing historical perspectives on what is really just a made up world(s), in other words, these non film stories don't stack up within a rejigged Star Wars Universe. I guess this means that these books are now rare and once the millions* of copies out there have started to disappear, then the value on the few remaining historically and narratively incorrect, books will start to be worth the big $. If only I could remember what the titles were... or if I had a real interest. Confession: I'm not a fan. Yep... not much to say there, other than... I'm not a fan.

So will there be a rush for 6 books which are retellings of the first 6 films, 3 of which are not considered to be of the best within the saga? Well, so far, NO. But i've got A New Hope that there will be a Return and Star Wars book sales will Strike Back.