Duncan's Masonic Ritual and Monitor; Or, Guide to the Three Symbolic Degrees of the Ancient York Rite and to the Degrees of Mark Master, Past Master, Most Excellent Master and the Royal Arch. by Malcolm C. Duncan.

Duncan's Masonic Ritual and Monitor; Or, Guide to the Three Symbolic Degrees of the Ancient York Rite and to the Degrees of Mark Master, Past Master, Most Excellent Master and the Royal Arch. by Malcolm C. Duncan. Hardcover book (no dust jacket) published by Dick & Fitzgerald, New York 1866 (third edition), 281 pages with some black and white illustrations. 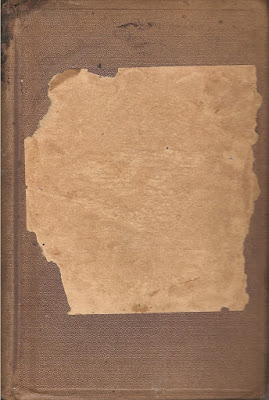 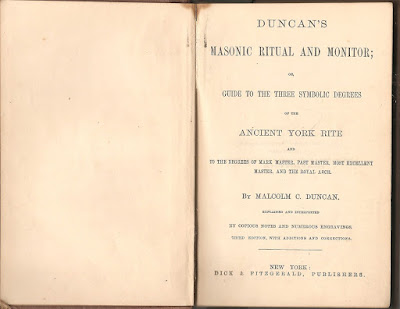 “This book presents details of Masonic initiation rituals, along with grips, passwords and regalia. It includes the three basic degrees of the Ancient York Rite, and four additional advanced degrees. There are over a hundred illustrations which show important details of the rituals, including gestures and symbolic pictures. Duncan's Ritual is careful to note known variations where they exist.” 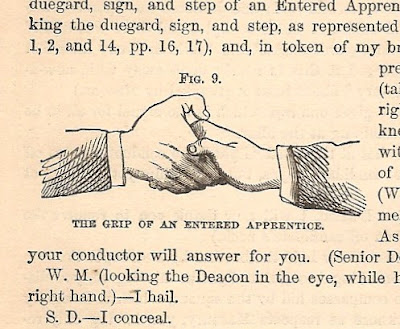 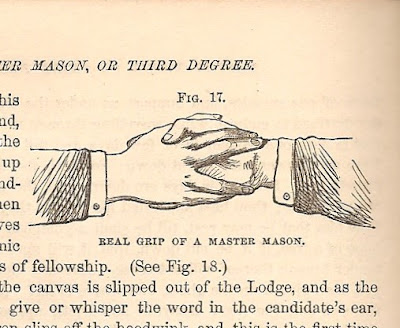 Yep, I know very little about the Freemasons. Fortunately this book has some nice pictures which should help clarify the mysteries of the “Three Symbolic Degrees of the Ancient York Rite and to the Degrees of Mark Master, Past Master, Most Excellent Master and the Royal Arch.” 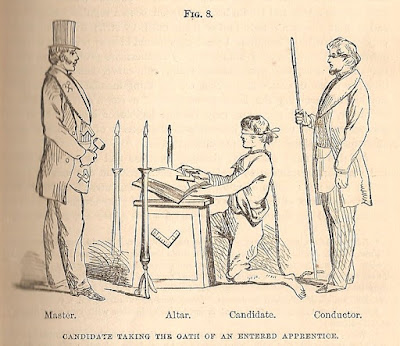 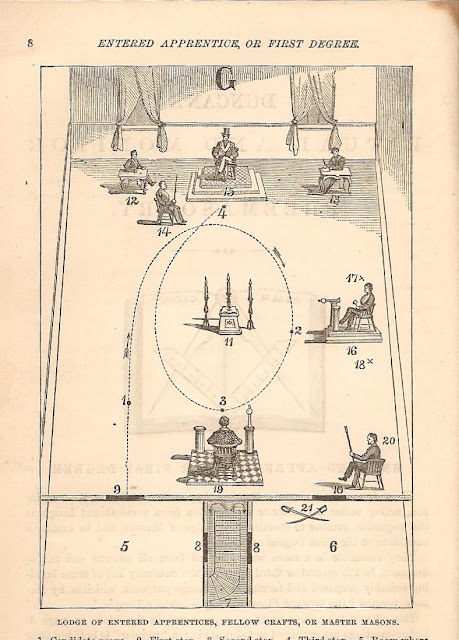 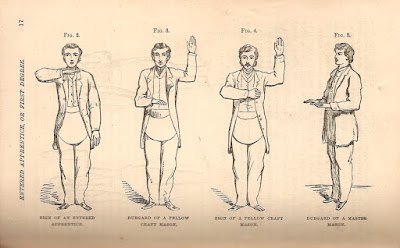 … and yes they are a friendly bunch. 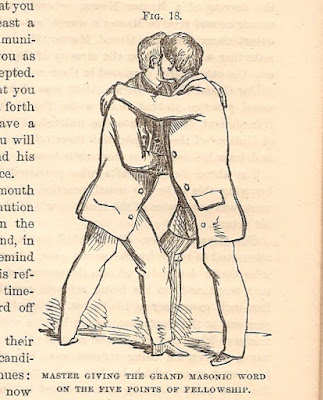 There were no goats harmed in this book.
Posted by robin at 1:18 AM No comments:

The Wrens and Warblers of Australia, narrative by John Douglas Pringle. 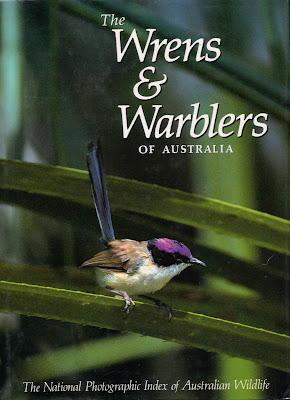 “Published in association with the National Photographic Index of Australian Wildlife of the Australian Museum, The Wrens and Warblers of Australia is a major work covering the 85 species generally referred to as wrens and warblers. It is the first in a series of books planned to cover all species of Australian birdlife and to resemble John Gould’s acclaimed nineteenth- century work The Birds of Australia through its appeal both to the intellect and to the eye. By presenting a readable yet authoritative text and superb colour illustrations, this attractive volume amply fulfils its aim.”

I feel like i've grown up with Wrens. Sort of like Tarzan and his apes, except less apes... and maybe even less Wrens... and, no I don't eat worms. My father had a sort of interest in them (Wrens not worms) and was even known to take a few fairly poorly executed photographs of any unsuspecting Wren that he thought was close enough for him to snap. His action plan was always to leave a few cake crumbs lying close by and then whilst eating the rest of the cake and drinking a strong black coffee he would wait. Conversation was conducted at a regular volume and would only be interrupted by my fathers picking up of his camera and snap, snap, some more blurry blobs somewhere in the distance of a regular sized photo.

I haven't thought about my fathers wildlife photography for a long time. I'm impressed that he was interested enough in these birds to do what he did and i'm even wondering what happened to all those photographs. One thing i'm sure about is that his photographs didn't make into this book. 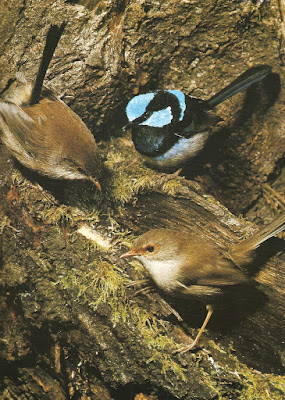 Some of my fathers cake eating friends.

Bird books are are an interesting flock. Some are very desirable and some are less desirable. I've never seen this title before finding this copy and by all accounts, it and others in the series, are all worth a bit. When I found this and a few other titles in the series, I was a bit excited. A new (…new to me) bird book can only be a good thing as birds are a popular subject. Whether this series is as desirable as I would like it to be remains to be seen, but I feel fairly confident that before too long it will have flown the coop.
Posted by robin at 12:36 AM No comments: 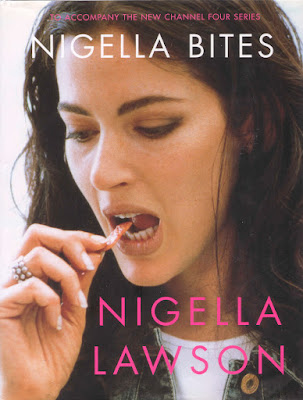 Packed with fresh ideas and exciting new twists on old favourites, Nigella Lawson brings you mouthwatering but simple recipes to add flavour to your busy life – from quick family meals and easy suppers to dinner party menus and roast lunches. With luscious photography, evocative food writing and a beautiful hardback design, this is a book you will treasure for many years as well as a delicious gift for friends and family.

About 3 years ago I wrote about “The Nigella”.  After that she had a bit of a run of bad luck/scandal, all of which was latched onto and poured over by the press and all of which had nothing to do with my blog post. I wont go into all the details (about Nigella... not my blog post) as we all know what the stories are, some of which are half baked and some over cooked, but over the last few years I have revisited my thoughts regarding my Nigellaphobia and if you've followed the Nigella scandals you may now also understand why my fear of Nigella was as strong as it was. Now that all of her eggs are out of the basket, I feel sorry for her. I saw a thing on the telly the other day about her not wanting to talk about any of this stuff, especially about her children. Good on her. Let's move on. I'm willing to move on.

Finally, her books sell... even pre loved volumes sell. I like that. I like it a lot.
Posted by robin at 10:49 PM No comments: 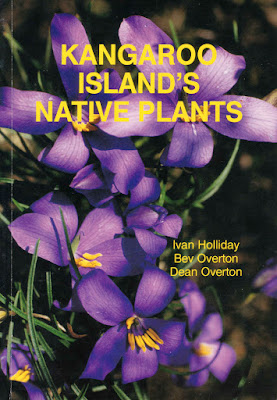 “Kangaroo Island is an area of Australia which still retains much of its native flora. It is a very special place for plants because of their high diversity, with many species differences from their mainland counterparts, as well as other species which are found nowhere else.  The aim of this book is to encourage both the Island’s visitors and locals alike, to appreciate but protect the beauty and diversity of this very rich flora.”

This book focuses on the flora and by my quick flick through, I can tell you there's quite a bit of it. According to the introduction, some of it is unique to the island meaning that any budding* botanist that should venture there will certainly have a unique experience. I guess to fully understand this experience one should have some sort of book... yep, this book.

Recently I sold a wonderful volume about Victorian Wildflowers to some aficionados of Wildflower spotting. I was impressed with their enthusiasm and was even more impressed that the book they were buying was a gift for a family member as their Wildflower appreciation seemed to extend to quite a few other members of their family. It was with this recent encounter/sale in mind that I decided that a book such as this whilst not specifically about wildflowers, has enough wildflower info in it to keep any person(s) interested in Wildflowers, entertained and informed. I reckon this book is sellable and therefore it is just begging to be listed on line, which it now is.

*Pun intended
Posted by robin at 10:44 PM No comments: