Golden Destiny: The Centenary History of Kalgoorlie-Boulder and the Eastern Goldfields of Western Australia by Martyn Webb and Audrey Webb. 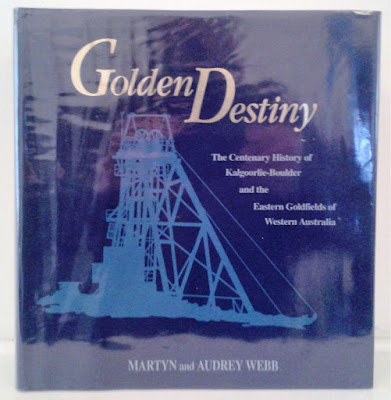 “Focusing on the twin mining towns of Kalgoorlie-Boulder, this book draws upon Western Australia’s experience of the search for and exploitation of gold over almost 140 years, with special reference to the discovery and development of the Eastern Goldfields and the famed Golden Mile. Their story is rich in detail. It describes how gold helped transform Western Australia, with its 1 million square miles of territory, from a land of ‘despondency and despair’ with less than 50,000 inhabitants in 1890 to its present population of more than 1.5 million (1993). Their story also covers the transformation of the Western Australian gold industry from its use of the most primitive methods to advanced modern technologies as it moved from free-lance alluvial mining, to labour- intensive heavily-capitalised company-operated deep mining, to the current reworking of 100 year old gold centres by large-scale open-cut mining operations. The book shows how isolation and aridity on the Eastern Goldfields gave a new twist to that peculiar age-old relationship between gold and people — and thereby helped to create one of Australia’s most distinctive ways of life. Commissioned by the City of Kalgoorlie-Boulder as its contribution to the centenary of the discovery of gold at Kalgoorlie in 1893 by Paddy Hannan, Tom Flanagan and Dan Shea, Golden Destiny is profusely illustrated by contemporary photographs, maps and diagrams, well supported with documentary evidence, and fleshed out with the real life stories of past and present goldfielders from all walks of life.”

Local histories. I don't know if it's the same all over the world, but people here in Australia do like to read about where they live (...or have lived... or where their ancestors have lived), no matter how big or small a place it is. During my book finding expeditions I'm often stumped by the amount of places with a history written about them, that i've never heard of. I think this could have something to do with growing up and living most of my life in one big city. It was only when I moved away from the throbbing metropolis of Melbourne all those years ago, that I realised how Melbournecentric my life had been up to that point. Don't get me wrong, I think I did have a fairly good geographical knowledge of this country and yes I did know where most of the bigger places are. It's when you find a book about Mundaring, Dixie or Yankalilla that things start to get a bit more interesting... and I start to get a bit bamboozled. Fortunately we now have google to help us figure out the difficult and embarrassing questions about where things are and I can confidently list a book on line as being a local history book about somewhere which I now have a fair idea where it is.

Kalgoorlie and Boulder (Western Australia, bottom half, inland from Perth) are places that I am aware of. Over the years i've sold numerous books looking at the history of this area and what a rich history it is. So rich that the authors of this book decided to fill over 1,000 pages with it's history, producing this large brick of a book. It's a statement, it's the sort of thing that could do you serious damage if not handled properly. Listing stuff on line, means that I have to handle any book I list more than a few times; carrying it home, shelving it, photographing it, writing it up and shelving it again. This is a two hand book, meaning that you need both hands to handle it. I can feel my biceps growing (or groaning) each time I pick it up. Books like this are the reason why kindles were invented... (not really).
Posted by robin at 12:18 AM No comments:

V for Vendetta by Alan Moore, art by David Lloyd. 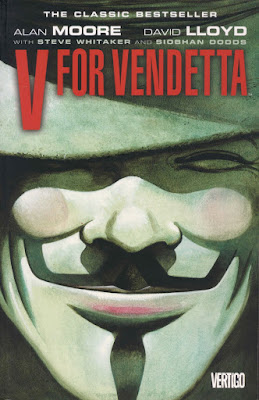 Yep, that's the same mask as worn by some members of Anonymous (click here). It's a Guy Fawkes mask that is often used on effigys of Guy Fawkes on Guy Fawkes night. Guy Fawkes night was once celebrated here in Australia with a bonfire with an effigy on top. The Springvale North effigy never had a mask... at least not as far as I can remember. It did have a lot of tyres, that I do remember.

V for Vendetta was written by Alan Moore, who if you don't know anything at all about comics or graphic novels is one of those people you really do need to know about or at least have some sort of vague knowledge of. I've read a number of his works over the years and even seen some of the films... and like Alan have been a bit disappointed by the films including V for Vendetta. Unlike Alan, I am willing to associate my name with seeing the films... he doesn't want his name associated with the films at all. If you've never read any of his books it's hard to explain why this is, but generally (and briefly... and my understanding of the situation) there is an integrity to his stories that loses something in the adaptions and Mr Moore is a man of integrity and doesn't like bullshit.

Going back to the Anonymous people, the publishers blurb to this book gives an inkling as to why they like the mask from this story as much as they do:
“A frightening and powerful tale of the loss of freedom and identity in a chillingly believable totalitarian world.”


I think this is an important book which despite have been written over 25 years ago, is still relevant to todays political climate. I don't think i'm alone in thinking this. Watch the news, you'll see what I mean...
Posted by robin at 12:00 AM No comments: 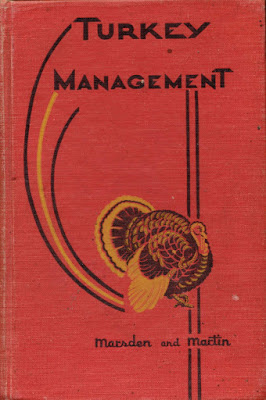 Some of the more regular readers of this blog may be aware that it is the unusual that excites this book seller. Yeah, a big glossy art book is a nice thing, but a worn, aged, vintage Turkey Management book is something to really get excited about. Art is great, but it's everywhere and most people like it, which isn't a bad thing particularly if you want to sell books. But seriously, do we need another art book on our shelves?* A Turkey book on the other hand is something else completely.

Imagine you have guests coming over for dinner. You welcome them into your house, exchange pleasantries and make them feel comfortable. Inevitably they will look around the room (don't we all) and if they are half decent people, they will look at your bookshelves and there sitting amidst the detritus of the modern bookshelf collection they will find... no, not Picasso... not Dali... Turkey Management. Wow. There are people who will notice the book and not mention it, but will store this information for later consideration and discussion.
“Why does X have a book about Turkey Management?”
“That's a weird thing to have a book about.”
“X is so out there, he/she has a book about Turkey Management.”
The more direct guest will comment immediately and open up the discussion regarding Turkey Management and why you have a book about it on your shelf. It could be a good way to break the ice and open up discussion... which means you should probably read it or at least be able to bluff a certain level of knowledge regarding Turkeys before inviting guests around.

So if you're looking for something really impressive for the shelf, this is the book for you...

Or if you're thinking of getting into old school Turkey Management and want to impress...