The Lost World of Irian Jaya by Robert Mitton.

The Lost World of Irian Jaya by Robert Mitton. Hardcover book published by Oxford University Press 1983, 235 pages with colour photographs and some black and white photographs. 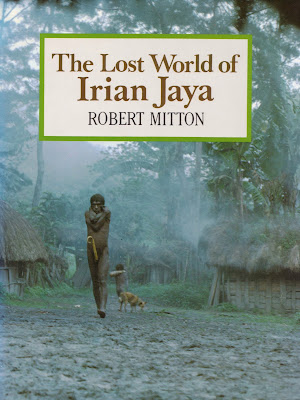 This pictorial study of a fast disappearing part of the world is the work of a remarkable Australian geographer and anthropologist. From 1971 until his death in 1976 (he was only 30), Robert Mitton worked, lived and travelled in the Indonesian province of Irian Jaya, formerly West Irian. In notes, letters, diaries and, above all, photographs, he compiled a unique document of his experiences of the cultures and environments of the five distinct groups living along the Baum River, a particularly remote part of the world. Indeed, at that time, there were still groups of people who had never seen Europeans or Indonesians; still groups living a Stone Age style of existence; and still people who were head-hunters and cannibals.

Irian Jaya? How fast things change, particularly when it comes to geographical/political names. A friend of mine once commented on the current lack of Yugoslavians anywhere let alone where what was once called Yugoslavia. They've all gone. It's not just the Yugoslavians that have gone, I've got family that lived most of their lives in a country that no longer exists (East Germany, and yes the East Germans have all disappeared as well). The Irian Jayans (?) have also now vanished (...possibly in more ways than one). Irian Jaya is now Papua and West Papua and wasn't a country at the time that these photographs were taken, nor is it now. It was a province of Indonesia and had been so since 1961 after they took over/invaded in 1961. Before that it was Dutch and before that it was...

There is an active resistance movement in Papua and West Papua and somehow this book is even more important and of interest now than it was back then. With my limited knowledge of what is happening just that hop, skip and jump from this island (Australia), things aren't going so well for the locals and the world that the title is referring to as “Lost” in 1983, has probably now gone. The Indonesians have been actively settling their own people into Papua and minoritising the locals such as those depicted in this book, whilst collecting big $$$ from Mining in the region. Yes, it all comes down to money.

This is not the first time i've had a copy of this book. Many years ago I had an ex library copy, which had seriously seen better days. It did sell despite the wear, which at the time I thought had to do with it's uncommonness. This copy isn't ex library and has some slight wear only, so I think it will be moved at some stage and hopefully at a nice price. “Yes, it all comes down to money,” but it will be cheaper than the cost the Papuans are currently paying.