The Death of Captain Cook: A Hero Made and Unmade by Glyn Williams.

The Death of Captain Cook: A Hero Made and Unmade by Glyn Williams.  Hardcover book published by Profile 2008, 197 pages with a few black and white photographs and illustrations. 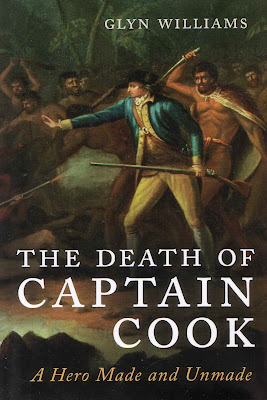 Here at Huc & Gabet Blogspot it is one superstar after another at the moment.  This particular superstar is probably bigger than Michael Jackson and Jah Wobble combined, in that his popularity, fame and influence is still being noticed after almost 250 years.  Yes, Captain Cook was/is a superstar.  Sure, he wasn’t in any movies and as far as I know he didn’t record any hits, but he may have been a sportsperson (I haven’t fact checked this, so I can only suppose) and he was very popular at the time… maybe not so popular in Hawaii, or Australia and probably New Zealand, but the British loved him.


And why wouldn’t they love him, the guy was ‘the pride of his century’.  Besides an illustrious career in the Royal Navy he was also a fearless explorer going where no man had gone before… at least no British man.  As with many superstars (eg. Michael Jackson) his life came to a rather dramatic early end due to a bloody and chaotic fracas in Hawaii, except in Cooks case the interwebs, facebook and twitter hadn’t been invented, so it took a year before anyone heard about it.  It’s his life and death and the aftermath of this news that is the subject of this book.  I like the idea.


In Australia, Cook, as with many other superstars, is a larger than life figure in our history which is why I picked up this book.  There are those who have issues with him and his legacy… a bit like Michael Jackson detractors… but either way, I believe that his influence here is undeniable.  This book doesn’t just look at Australia and it’s history via Cook, from what I can gather it’s considerably broader in scope… a bit like Jah Wobbles musical career.
Posted by robin at 12:27 AM