American Visions: The Epic History of Art in America by Robert Hughes.

American Visions: The Epic History of Art in America by Robert Hughes.  Hardcover book published by Harvill Press 1997, 636 pages with colour and black and white photographs as well as colour illustrations throughout. 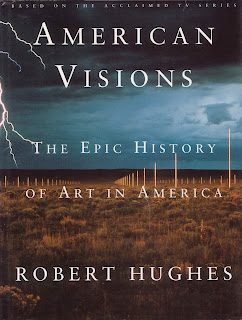 “Writing with all the brilliance, authority and pungent wit that have distinguished his art criticism for Time magazine and his greatly acclaimed study of modern art, The Shock of the New, Robert Hughes now addresses his largest subject: the history of art in America.”

Robert Hughes passed away last year.  By all accounts, he led a remarkable life and led it to its fullest, leaving a legacy of literary works on many subjects with one of those subjects being art.  I don’t mean to sound like a hick from the backwoods of downunder land, but its pretty amazing that this guy was born here and then ended up one of the worlds most well known and read art critics.  I’m sure no one would have guessed this is where he was heading when he left our shores in 1964… least of all him.


Anyway, the guy died and being the cold heartless bookseller that I am, all I could think of was how unfortunate it was that I didn’t have any of his books for sale at that particular time.  Here we are in March of the next year and I find this great book and wonder if everyone has forgotten who this guy was as there seems to be very little interest in the current ebay listing I have of this title.  Or maybe it’s just this book.  I had a copy of his fishing book (there was a bit of controversy around Hughes and a fishing trip to Western Australia) and it sold fairly quickly in the shop.  I personally think this is a much more “of interest” book than a fishing book… but I’m not a fisherman... i'm not an artist either... well not that sort of artist.
Posted by robin at 12:09 AM