Memoirs of a Geezer: The Autobiography of Jah Wobble: Music, Mayhem, Life by Jah Wobble.

Memoirs of a Geezer: The Autobiography of Jah Wobble: Music, Mayhem, Life by Jah Wobble.  Paperback book published by Serpents Tale 2009, 344 pages with some black and white photographs. 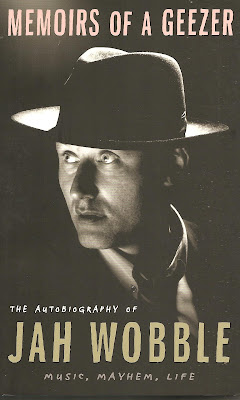 Last week I wrote about the now departed superstar, Michael Jackson and in keeping with the theme of music superstars, I thought that this week I might write about Jah Wobble.  Maybe he’s not a superstar to you, but there was stage in my life when Jah Wobble was a superstar to me.  I collected everything I could find, which involved many 12 inch singles spanning many genres and always only available as imports here in Australia.  I even managed to track down his very first12 inch single, which in retrospect is not one of my favourites, but I had to have it.  After a number of years his releases began to multiply and to be honest, he and I had moved on from his early material and whilst I still have a fondness for all of the early stuff, I’m a little more selective with the later stuff.

One of my favourite pieces of vinyl Wobble (I now have it on CD as well) is his collaboration with some of the guys from Can.  I remember hearing this for the first time at a pub gig before the band came on and interestingly, this particular band had this as their warm up music for the next twelve months.  They were obviously as impressed as I was.


Memoirs of a Geezer is a great title but it wasn’t the title that gave me an indication as to what this book was, it was the cover.  Wobble is very distinctive in appearance and the pose and the hat (he’s possibly loosing a few hairs) gave me the shock of my life.  Here we are in 2013 and I’m picking up a copy of Jah Wobbles biography, amazing.  This was the guy who people were writing about in the mid 1980s New Musical Express, claiming they had seen him working in the London Underground… which is where he was working at the time as he had left the music business.  Twenty five years later and the guy is superstar enough to have his biography published.


Wobble has had many ups and downs, one could even say that at times his career has been a bit wobbly, but it is truly a great thing that he is still around… even if not everything he now does is to my taste, his early music is still something that I often listen to and thoroughly enjoy.
Posted by robin at 2:27 PM