Test Everything: Hold fast to what is good by Cardinal George Pell.

Test Everything: Hold fast to what is good by Cardinal George Pell.  Hardcover book published by Connor Court 2010, 372 pages with a few colour illustrations and photographs as well as a few black and white illustrations. 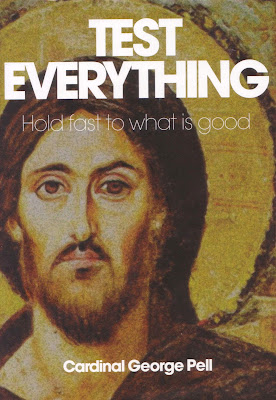 As I write these words, there’s a radiance of Cardinals sitting around in the Vatican contemplating who will be the next head honcho of the Catholic Church.  There will be the whole (baffling) smoke signal thingy for which they have just installed the temporary chimney and then there is of course the controversies that do not need any installation as they are permanently installed in the Vatican, that are overshadowing the whole process.  Cardinal George Pell is Australia’s outsider hope for the top job although according to some he is not the best choice due to a poor track record relating to the controversies I’ve not mentioned above. 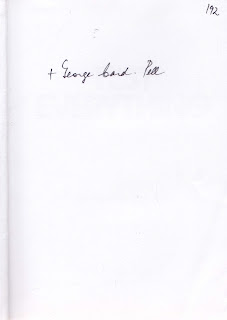 Whilst busily defending himself and his church, George managed to scribble down a few words and publish this book and even managed some more time to sign and number this copy.  Now is probably the most of interest time to try and sell this rarest of books before interest begins to decline on all things Cardinal Pell… although with an Australian federal election due later this year and despite the assurances of the leader of our current main opposition party, George will probably remain in the limelight.

… and you never know, maybe he will get the top job.  Just wait until the smoke clears… if it ever does.
Posted by robin at 9:25 PM