Taj Mahal by Diana Preston and Michael Preston.  Hardcover book published by Walker & Company 2007, 317 pages with some black and white and colour photographs and illustrations. 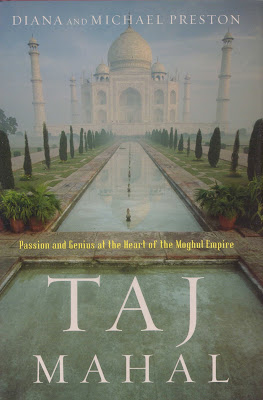 The first time I visited the Taj Mahal, it cost me around eight Australian cents to get in.  I was a backpacker at the time and the fact that Indians paid less than two cents to see the same thing annoyed me immensely.  In hindsight, I think eight cents was quite reasonable and I now recognize that my annoyance was unreasonable.  The last time I visited the Taj it cost me considerably more than eight cents and it took a rather long time to pass through the security checks before being able to enter.  It took so long that they were handing out bottles of water to us inpatient tourists to avoid people passing out in the heat.  All of this is of course due to various people of various religions threatening to blow the thing up.  So far, they have failed.

It is impressive and one of those things that you never forget once you’ve seen it… at least I’ve never forgotten it.  Quite simply, it is stunning in its beauty and its sentiment (…it’s a mausoleum) and well and truly deserves its world heritage status.  If you’re in the area, I recommend a visit.  There are lots of other great sites and things to see around the Taj as well, unfortunately there is an aggressive tourist industry that can dampen the appreciation, but if you persist and remain focused, there are many rewards… and no, the Indian Government hasn’t paid me to write this… although if they want to slip me a few rupees, I wont say no.


This book looks at the history of the Taj and due to my interest and fondness for most things Taj Mahal, I tend to pick it up when I find it.  In other words, this is not my first copy.  The other one I had rather pleasingly sold to someone who I can only assume had a similar interest as moi, so of course when I find another copy, I snap it up.  Besides making a small amount of $$$ (it’s not an expensive book… but not as cheap as eight cents), I like the idea that I’m sharing my passion for Moghul mausoleums with others.  This may sound a bit hokey, but it’s true.
Posted by robin at 1:39 AM