The Story of Yiddish: How a Mish-Mosh of Languages Saved the Jews by Neal Karlen.

The Story of Yiddish: How a Mish-Mosh of Languages Saved the Jews by Neal Karlen.  Hardcover book published by William Morrow 2008, 324 pages. 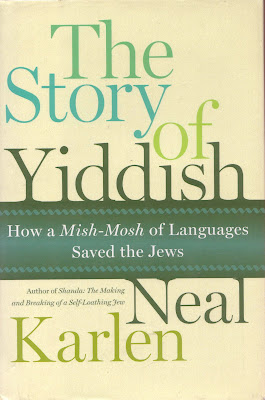 I don’t speak Yiddish.  I wish I could and I guess it is still a possibility, but at this point in time it doesn’t appear to be very likely.  I remember the first time I heard Yiddish being spoken.  I was on a tram travelling through Balaclava in Melbourne’s South when I heard what I thought was German.  (Before anyone comments about my eavesdropping on other people’s conversations, these people were sitting straight across from me and unless I began singing or humming it was a bit difficult to avoid hearing them talk.)  I do speak a bit of German and I can understand it fairly well, so I was fascinated when I realized that here was a language that whilst sounding vaguely familiar, wasn’t.  Yes there were a few words that I picked up in the conversation that were German(ish) and strangely I got the basic gist of the conversation (they were talking about the people on the tram and the streetscape outside).

Ever since then I have had a fascination for Yiddish.  It’s not something that you hear very often here in Australia particularly as those older speakers that do speak it become fewer in number and also, as far as I am aware, there are no Yiddish speakers here in Clunes (country Victoria, Australia).  When I do feel like a hit of Yiddish I listen to some excellent CDs that I bought a while back (click here and have a quick listen).   I’m not the only person with a fascination for it… there’s the author of this book, a speaker of Yiddish since childhood… and a few others of which I know a few thereof.  Apparently Yiddish is steadily increasing in popularity and who knows one day it may even overtake Esperanto in number of speakers*.  For anyone with an interest there’s a Yiddish Wikipedia and there’s heaps of stuff on the interwebs… but the best place to start is with this book (… sometimes my hard sell shocks me).


*On the eve of World War II, there were 11 to 13 million Yiddish speakers (Jacobs 2005). The Holocaust, however, led to a dramatic, sudden decline in the use of Yiddish, as the extensive Jewish communities, both secular and religious, that used Yiddish in their day-to-day life were largely destroyed. Around five million people—85 percent of the Jews who died in the Holocaust—were speakers of Yiddish.  (Wikipedia)
Posted by robin at 8:24 PM