Down to the Beach: Mentone Life Saving Club History 1920 to 2010 by David Grant.

Down to the Beach: Mentone Life Saving Club History 1920 to 2010 by David Grant.  Hardcover book published by Mentone Surf Life Saving Club 2010, 244 pages with black and white, sepia and colour photographs throughout. 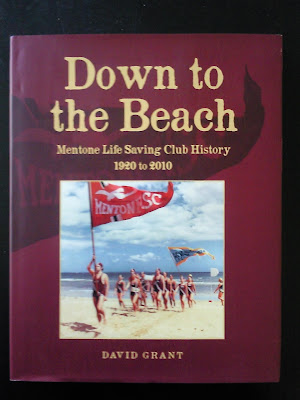 1920, the year this club was founded, is early in the history of Surf Life Saving Clubs.  The first documented Australian clubs were only founded a few years before this in Sydney (1903 or 1907, depending on which wave you wish to catch) although according to this book, Victoria had a Royal Life Saving Society in 1904… but of course this is not as important as Sydney and New South Wales have long been considered the homeground of life saving.  I guess that old rivalry between Melbourne and Sydney extends to all facets of Australian life… even the saving of schmucks like me.

“Port Phillip hosts many beaches, most of which are flat, shallow and long, with very small breaks making swimming quite safe. This attracts many tourists, mostly families, to the beaches of Port Phillip during the summer months and school holidays. Water sports such as body boarding and surfing are difficult or impossible, except in extreme weather conditions.” Wikipedia

Mentone is a suburb of Melbourne.  Melbourne is situated on a Bay by the name of Port Phillip Bay.  Despite not being a big fan of the beach, I have been more than once and I think I can safely say that there ain’t no surf in Port Phillip Bay, which is probably why the title of this book refers to the Mentone Life Saving Club and not the “Surf” Life Saving Club.  Despite the title and the name of the club the book was published by the Mentone Surf Life Saving Club, which is (or was) possibly their official name.  Realistically though they have probably avoided using the word “surf” in their public name so that idiots like myself don’t comment about the difference… which I guess is what I’ve done.

The book is what I would call a lavish production.  It’s large format, hardcover and full of photographs.  I can’t imagine this was a cheap exercise on behalf of the club (the publishers), yet I am tempted to say that the book does appear to be a labour of love.  Any volunteer organization such as this depends greatly upon the goodwill of its members and I reckon the book is mainly aimed at current and past members of the club.  If you lived in Mentone or were interested in Surf Life Saving Clubs or just plain Life Saving Clubs then you might have an interest as well.  If you surf the net you should easily find this copy as it’s currently the only one available through the usual book sites… and it desperately needs saving.
Posted by robin at 9:40 PM