Builders to the Nation: The AV Jennings Story by Don Garden.

Builders to the Nation: The AV Jennings Story by Don Garden. Paperback book published by Melbourne University Press 1992, 417 pages with some black and white photographs. 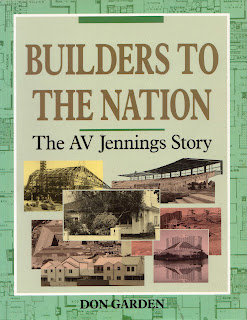 It seems like just yesterday that I was growing up on the outer fringes of suburban Melbourne.  It was so outer suburbs, that I could easily walk to farmland.  All of that farmland is now gone.  I don’t want to get all bleary eyed and nostalgic about rolling green hills with cows and sheep, or about having childhood adventures amidst the birds and bees… or even teenage adventures with the birds and bees.  Let just say that the green grass of home is now just homes.  The reason I mention all of this, besides a weird sense of nostalgia for nostalgia, is that I have never reminisced about any of this before writing this blog entry.  And why now?  It was AV Jennings that took all of this away and this book is a history of this taking away… actually it’s just a history of AV Jennings and has nothing specifically to do with the taking away of my youthful haunts.


Jennings began building in 1932 and are still happily building today.  For anyone reading this that is not from Australia and has no idea what AV Jennings is, we are talking about a construction company that built housing and housing estates, as well as larger projects, that we here in Australia of a certain age are very familiar with.  I think this is due to good promotion and advertising*, and the fact that they operated on such a massive scale.  I don’t remember any other company that built housing in the 1960s and 1970s other than Jennings, although I’m sure that they existed.  I do remember seeing large and small billboards promoting Jennings and it seemed as if everyone back in the day was moving into an AV Jennings home on the edge of the suburban sprawl.  Of course this meant that the land had to be made available for housing and therefore the farms were sold and the houses built, which is why the green grass of home is now brick veneer.


Jennings wasn’t (and isn’t) just Melbourne based and according to this book they were building all over Australia.  The book highlights many of those projects up till publication and has some great photographs and brief histories of those developments.  We now have many newer companies other than AV Jennings, that are “Builders to the Nation”.  I was recently talking to a friend from Woodend (about an hours drive from here) about her communities concerns with a Villawood** development in the area.  I guess they also are about to loose some of their easy access to the green grass of home.


I’ve sold a copy of this book in the past and I feel fairly confident that I can sell it once again.  The increase in middle class Suburban sprawl here in Australia is an important part of Australia’s post WWII history and AV Jennings were a big part of it.  Anyone interested in this aspect of Australian history, or living in a vintage housing estate, could possibly be interested in this book.