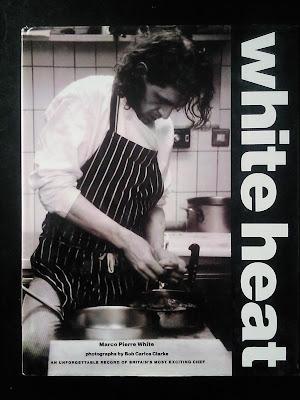 ““Believe the hype... This is a meteor hurtling through the restaurant firmament powered by the extraordinary passion of one young man.” Good Food Guide, 1989. “You’re buying White Heat because you want to cook well? Because you want to cook Michelin stars? Forget it. Save your money. Go and buy a saucepan. You want ideas, inspiration, a bit of Marco? Then maybe you’ll get something out of this book. I warn you, though, it’s a jigsaw, and there’s a hundred pieces missing. What do you expect? I’m just at the beginning of my career. You’re not going to see the true Marco until I’m 35 or 40. 1 haven’t even been to France yet. But what’s here is me, 1990 vintage, built on a foundation of energy and honesty and quality.”  So speaks Marco Pierre White, the youngest chef ever to be awarded two Michelin stars and the most exciting chef—patron in London today. Famous for his innovative and technically brilliant cooking and his outrageous personality, his restaurant, Harvey’s, in south London’s Wandsworth, is not only feted by all the top critics but is also a magnet for the famous and the glitterati.”

It seems like a lifetime ago that I first wrote about Mr. Pierre White and it wasn’t long after that that i wrote about him again. Both of these blog entries were in 2010 and here we are, it’s nearly 2013 (now 2014) and I have found absolutely zero titles by MPW in the meantime… that is until I stumbled upon this one.  Both of the original books have since sold after I spruiked about them and at fairly nice prices, which is always a good thing.  I think the second book may have sold after someone found my blog entry and inquired about the availability (i’m fairly certain that I posted the book to Korea), so of course I have been actively and enthusiastically searching for more MPW even since.  I finally found this one with a few other cookbooks which interestingly were also of a high standard in regards to their $$$ value.  Some of these books I have just listed on ebay and I’ve got a feeling that they will end up on Books & Collectibles as my track record of selling these more eclectic/rarer/valuable titles on ebay is not that good.  My success with Books & Collectibles and cookbooks is slightly better.
Posted by robin at 2:47 AM