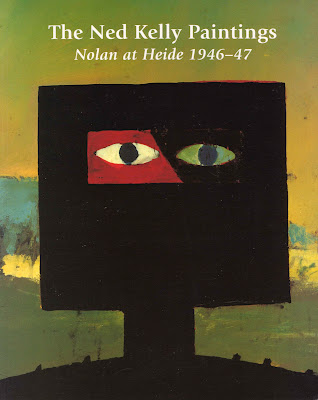 In my younger years I didn’t really have an appreciation for the art works of Sidney Nolan.  Actually I didn’t like his oeuvre at all.  I’m not sure why this was, but more than likely it was just that my tastes in art at the time were different to my current tastes.  It’s not as if I went around poo pooing Nolan or anything thing like that.  No, it was just that his art wasn’t my thing.

It was a few years ago that I ventured out to some regional art galleries here in Victoria, mainly to see an exhibition of John Brack’s nudes but figured that while I was in the area I should have a look at a Nolan exhibition at another gallery not that far away.  The Brack exhibition left me cold.  From memory it was lots of pale looking nude women (possibly a few men) sitting around looking a little sickly and cold… at least, that’s my memory of it.  I was more than a little disappointed.  So venturing to the second exhibition which I was only going to due to its close proximity to the first, I was pleasantly surprised to see an incredible exhibition of Nolan’s Antarctic paintings.  Someone recently exclaimed to me after I gave a brief description of the exhibition concerned, that they had no idea that Nolan had done paintings of Antarctica which is exactly what I thought as I stood there gawking at them.  (Click here if you want to see some examples.)

The two exhibitions were a great contrast in 20th century Australian art and both left a lasting impression on me, one negative and one positive.  Both artists had major retrospective exhibitions in the following years in Melbourne and after visiting both, it was once again Nolan that impressed me the most.

I didn’t see the exhibition that this catalogue that I’m supposed to be writing about is from.  To be honest, 1997 was still when I had no interest in Nolan.  But as I do now have an interest I would not hesitate in picking up any books about Nolan and his work (as i have done in this instance), or go to an exhibition and gawk some more.
Posted by robin at 1:54 AM