Everyone Wants To Be Fuehrer: National Socialism in Australia and New Zealand by David Harcourt.

Everyone Wants To Be Fuehrer: National Socialism in Australia and New Zealand by David Harcourt.  Paperback book published by Angus and Robertson 1972, 153 pages with black and white photographs and illustrations. 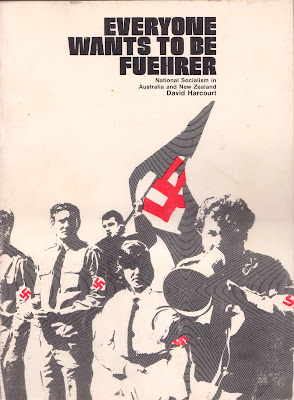 It shouldn’t really come as too much of a surprise that like the rest of the world, we have our own Nazis here in Australia and New Zealand.  They are everywhere… well, maybe not everywhere, but they’re around.  This book looks at some of those Aussies and Kiwis who were fond of the Swastika in the 1970s.  Maybe it’s just me but I find the whole thing a little creepy.  Surely someone must have told these people that National Socialism wasn’t the success that some thought it would be and if anything it was a complete failure on many, many, many different levels.  Maybe it’s the dressing up and posturing that appeals to these people, I don’t know.  What I do know is that this book is a little scary. 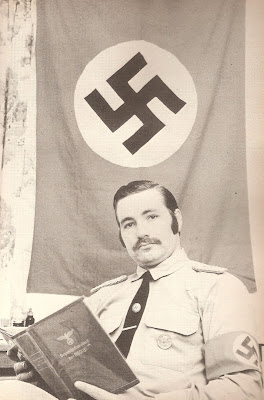 I first saw this title at a friends house gathering dust amidst his Australian politics books.  A title like this one needs to be perused, even briefly to get some idea of what it all means and peruse I did.  I couldn’t put it down, it was so truly bizarre that I had to peruse the whole way through and vowed at the end of the perusing that I would find a copy for my own shelf… and here it is a year of so later.  Now, here’s something of interest, when I first saw this book, I thought it would make a great read and addition to my personal bookshelf, but when the hard choice arrived (to sell or to read?), I decided that I don’t really need this book gathering dust on my shelves. This doesn’t mean that the book is not of interest, it’s just not what I need in my life.  At this point in time, no one else needs it either (it hasn't sold), but someone will at some stage.
Posted by robin at 1:52 AM