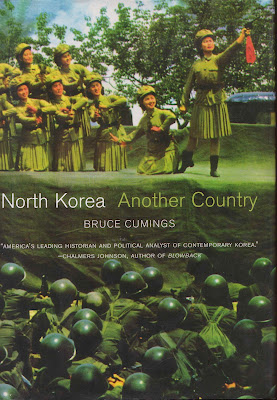 North Korea is another country.  For us outsiders it all seems a little strange, as if they are being governed by a crazed dynasty of very unreasonable people.  For those inside the Bamboo Curtain, well they may think otherwise, but unfortunately they are not able to tell us what they think.  Not that I’m suggesting that we should all be sitting down with North Koreans over some bowls of Kimchi to discuss the situation in their homeland, although that would sort of be nice, no, what I guess I’m saying is that we don’t really know what is going on over there and what we do know is at times a little hard to comprehend.  As a paid up member of the Axis of Evil (?), North Korea has more than a few issues both domestically and internationally. This book was written by an American history professor and seems to tick all the right boxes, although I’m sure the North Koreans would disagree with this assertion.

Considering the book was written a few years ago, I can’t really see that it has dated that much.  Yes, there is a new leader but is he really that different from the last guy (his dad) or the guy before him (his granddad)?  Somehow I don’t think so. It contains quite a bit of history and lets face it, the current affairs of 2004 are now history and a lot of what is happening now in North Korea was happening in 2004… at least I think it is.  Where’s that bowl of Kimchi?  OK, it would be nice if there was a newer edition of this book, but I of course don’t have a newer edition and only have this one to spruik about.
Posted by robin at 1:05 AM