How Not to be Eaten: The Insects Fight Back by Gilbert Waldbauer.

How Not to be Eaten: The Insects Fight Back by Gilbert Waldbauer.  Hardcover book published by University of Calfornia Press 2012, 221 pages with a few black and white illustrations. 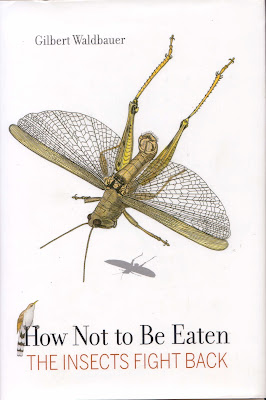 “All animals must eat. But who eats or doesn’t eat whom and why?”

This book deals with a subject that I deal with quite a bit in my life.  Fortunately though, I’m not an insect so I don’t really have to worry too much about it as the predators that are out there haven’t succeeded in eating Huc & Gabet as of yet... despite their best attempts.

A while ago we had a locust plague here in country Victoria and I was very interested in trying some of the many recipes available on the interwebs.  Unfortunately I didn’t have a net or access to small children (they are apparently very good at catching them) at the time, so I was unable to sample the culinary delights of the locust.  A friend of mine (with small children) did manage to partake and gave quite a favorable report.  All of this has nothing to do with this book as it is not concerned with us humans*, but rather with the other members of the animal world, so unfortunately there is minimal information regarding human locust interaction or information regarding how humans can avoid being eaten.
What this book does have going for it is that it is written in a very readable manner and is one that I can well imagine will be popular with your regular popular science reader. One thing I do believe, is that this book is more of a spontaneous purchase and will probably sell better from my shop stock as apposed to on line.  Why do i think this?  Well I have read a number of popular science books over the years and I think I could be tempted to read this one if I stumbled upon it… that is if I didn’t already have a pile of books that will probably take me the best part of the next 5 years to read.

* I’m just assuming that all my readers are human.  My apologies to any that aren’t.
Posted by robin at 3:19 AM