The Philosophy of the Australian Liberal Party by D. M. White. 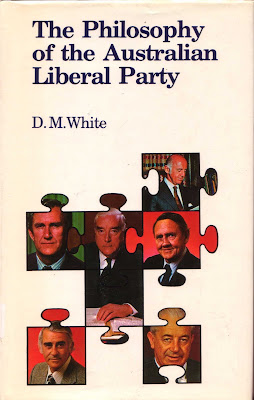 “A lucid and detailed analysis of the philosophical foundations of the Australian Liberal Party’s Federal Platforms presented under the headings of human nature, society, the functions of government, the best form of government, the role and rights of citizens, and the character of politics. In this pioneering study of Australian political thought, D. M. White offers a challenging and subtle view of the place of political philosophy in the life of a political party today. Appendices provide the texts of the Liberal Party Platform and Platform amendments from 1946-71.”

For those readers of this blog who are not aware of recent Australian politics, we have a new government.  The Australian Liberal Party won last weekends election by a narrow margin… whoops… sorry… by a considerable margin.  The informed voters of Australia have decided that they want a change… or is it that they want slower internet speeds than were on offer by the Labour Party… or it might have been that they wanted “the” media mogul and our mining magnates to make a few more $$$ than they already do.  But I’m not here to bemoan the state of our electoral outcome. Democracy has spoken.  I will accept what the people of Australia want.  Sure, gay marriage is something that I don’t have an issue with, but obviously a good proportion of Australians do have issues with it, and voted accordingly.

The Philosophy of the Australian Liberal Party is an interesting look at what Liberals here in Australia think.  It’s a perfect guide for those of us who did not vote for Prime Minister Budgie Smuggler or his cabal of fatuous ministers… (“But I’m not here to bemoan the state of our electoral outcome. Democracy has spoken.”)  Interestingly the only person still alive on the front of this dust jacket (Malcolm Fraser) very publicly declared that he was endorsing someone from another party (The Greens) for this election.  He has been a harsh critic of the current line up for a number of years and has few kind words to say about Tony and his mates.  Bob Menzies, pictured in the middle is never far from Liberal Party thoughts.  They all love him, and so they should.  Even Tony loves him.  Anyone who can cling on to the top job for 18 years is someone to be admired.  I don’t know that Tony will be around for 18 years… 18 years of Tony's slow internet, is not something that I want.
Posted by robin at 2:52 AM