Piracy: The Complete History by Angus Konstam.  Hardcover book published by Osprey 2008, 336 pages with black and white illustrations as well as a few colour illustrations and photographs. 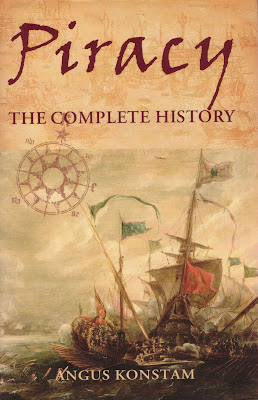 Recently the world celebrated another Talk Like A Pirate Day… Maybe not the entire world, but enough of it to associate the word “international” somehow with the words “Talk Like A Pirate Day”.  Sitting here is the calm after the storm, I’m wondering if any real Pirates spoke like Pirates on the day.  Did the party shops in Somalia have a rush of sales on eye patches and fake cutlasses?  Somehow I think they probably didn’t and that any real pirates in Somalia and elsewhere, didn’t give two hoots about the idea.  I didn’t meet anyone talking like a pirate on the day…or any other day.  Regardless of the lack of enthusiasm here and in Somalia, I do like the idea as there is an absurdity about the concept that sort of goes beyond the whole pirate thing.


This book doesn’t contain any information about Talk Like A Pirate Day and there are only a few references to Johnny Depp.  It does have lots of information about blood curdling, cutlass waving, freebooting Pirates, who were sort of like the Osama Bin Ladens of their day but with less religion.  Pirate history is a popular subject and whenever I find good, and by ‘good’ I mean authoritive non fiction like this volume, I tend to pick it up.  It’s been more than once that a customer has walked into the shop and asked for books about Pirates and I am always happy to oblige.  Interestingly I’ve had no one buy this book so close to Talk Like A Pirate Day.  It is possible that people that talk like Pirates aren’t really that interested in Pirates and are just happy to be absurd for that briefest period of time.  I’m not that worried though, as I know that a Swashbuckling Pirate fan is not far from landfall and hopefully not that far from here.
Posted by robin at 1:05 AM