Stunned Mullets & Two-Pot Screamers: A Dictionary of Australian Colloquialisms by G. A. Wilkes. 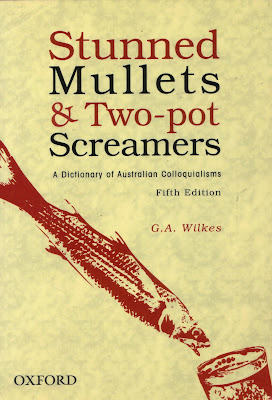 “Good day - The all purpose greeting that can be used in lieu of ‘Good morning’, ‘Good afternoon’, etc.”

Here in Australia we have many unique and interesting ways of using the Australian language.  There isn’t really a formal form of the language as such, and those that do vary their English, can vary it to various degrees.  I personally tend to use Australian Colloquialisms differently in different situations… and thinking about it, I think most other people do the same.  I do say ‘G’day’ but I’m just as likely to say ‘Hello’ when greeting someone.  This is all done in a subconscious manner, that now that I have thought about it, will probably become something that I will pay more attention to from now on.

As an Australian, there is one thing that I never do and that is write the word(s) ‘G’day’.  I don’t know anyone here that does.  It’s more of a spoken thing and not a written thing.  I am of course not an expert on Australian language usage, but I do speak to people and I do have written contact with people and ‘G’day’ (or ‘Good day’) is not something that I or my fellow Australians ever write.

Your probably wondering why I’m waffling on about ‘G’day’ and there is a reason.  As an on line bookseller I deal with people from all over the world and of course there is a small amount of correspondence between buyers and myself.  More than once I’ve had inquiries from distant shores that begin with the words ‘G’day mate’.  I guess the person at the other end of the interwebs figures that I’m Crocodile Dundee living in the desert watching the Kangaroos hop past my house avoiding man eating crocodiles.  The truth is that I’m not Crocodile Dundee and the Kangaroos have only hopped past a few times*.  The first time this happened I was a bit annoyed (at the ‘G’day’, not at the Kangaroos).  It was the whole Aussie stereotype thing that at times some of us find a bit cringeworthy and annoying even though we often do use these words ourselves.  The reality is that I’m not here to criticise others in their usage of colloquial Australianisms and over time I’ve come to appreciate that the person at the other end is just trying to be friendly and I shouldn’t really be annoyed at anyone about to do business with me. So ‘G’day mate’ is a bonzer phrase that isn’t worth chucking a tanty over.  If anyone out there wants to use it to buy a book from me, go ahead, I don’t mind.

In this book ‘Good day’ is listed and ‘G’day’ isn’t, although under ‘Good day’ there are some examples of the use of ‘G’day’:

“Qantas has issued firm directives to its cabin crews that ‘G’day’ and ‘Mate’ were not to be used when welcoming passengers aboard.”


There’s lots of other wonderful words and phrases in this book that I don’t know of anyone using on a regular basis.  But it’s nice to flick through and realise that due to some sort of strange linguistic osmosis, I know these words and what they mean… and if someone did say something to me that I didn’t understand, then this is the book I would use to look it up in.

*Not true.  They were Wallabies.