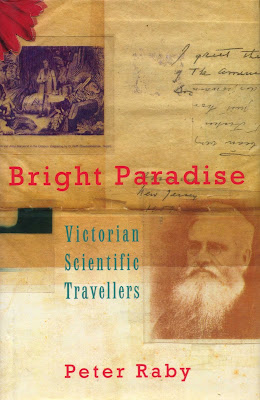 “This book traces the extraordinary journeys of discovery of some key Victorian scientific travellers. Inspired by Darwin and his voyage on the Beagle, a new generation of naturalists and scientists set out to explore the tropical forests and mountain ranges.”


In a past life, a friend of mine would refer to this sort of book as a “Robin book” and indeed it has many of the qualities that this particular Robin looks for in a history book.  Solo travel in adverse conditions to exotic locations with a dash of science, is something that is “my thing”, and I believe that’s what this book is all about.  So, yes, this is a “Robin book”, which is probably why I was tempted to picked it up and now have it for sale.


Quite awhile ago I wrote about Alfred Russel Wallace and my appreciation for his works.  I even mentioned a biography that I had previously read on the man and would you believe it, it was written by the same bloke who wrote this lovely collection of shorter biographies of similar minded folk, of the same mold as Wallace.  This one was written before the Wallace biog and I can only assume that after doing the research which includes Wallace, Peter decided an expanded biography could be worth a go.  There is a copy of the Wallace Biography sitting on the personal bookshelf (not the Huc & Gabet shelves), so I guess there are people out there who do buy by this type of book (me).  I bought my copy new as I didn’t want to wait to find it second hand and from memory it wasn’t cheap.  I get the feeling this book wasn’t cheap when it was new either.  It’s now secondhand.

Despite this being a “Robin book”, I haven’t read it… as of yet.  If it doesn’t sell on line I may be tempted to put it on the top of my to be read pile.  This really is my kind of book.
Posted by robin at 12:10 AM