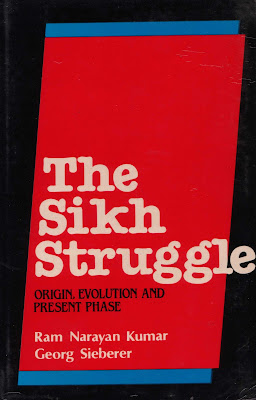 I’ve just finished reading an excellent history of the North West Frontier* (now in Pakistan and next to Afghanistan) and Afghanistan.  It was great, but unfortunately the book was written and published during the Soviet occupation of Afghanistan and didn’t contain any of the newer interesting stuff that has happened in this area since… This doesn’t mean the book contained uninteresting stuff, quite the opposite.  This part of the world has been a hot point for a long time and when it’s not boiling over, it’s been on a low simmer.
I mention this other book as it does touch upon the Sikhs and the conflicts that they had with the British over the creation of a Sikh state (Khalistan).  This book, "Sikh Struggle", looks at the long and involved history of the "Struggle" and not so much with the North West Frontier or Afghanistan.  By the 1980s the British were long gone, yet Sikh militancy was once again on the rise in India and abroad.  Militants did blow up a plane in 1985, and there was the whole Golden Temple/Operation Bluestar fiasco, which ended with a lot of Sikhs dying after Indira Gandhi’s Sikh bodyguards let her know what they thought of Operation Bluestar**.
By the early 1990s, when this book was published, the Indian army had started to get a handle on the whole situation and of course during all this time Kashmir was bubbling away and then began to boil over.
Sikhs are a very proud people and from my own minimal experience, a very friendly and inviting people.  I visited the Golden Temple in Amritsar many years ago and found the whole experience to be a warm and memorable one.  Maybe they were trying to convert me… The truth is, the whole turban wearing business is not really my thing.  As i walked around the temple, Sikh pilgrims from all over the world were lapping up the atmosphere and generally enjoying themselves. The whole place had a family day out sort of feel to it and I was made to feel most welcome.  Maybe I missed the point.  That is, the whole religious thing.  But as a complete outsider, I did enjoy the atmosphere.  Getting back to Operation Bluestar (the invasion of the temple by the Indian Army to remove Sikh militants), there were many reminders of this event within the temple complex.  Even though most of the bits that were destroyed had already been rebuilt, people were very keen to point out all the finer details to me, just in case I didn’t notice.
My other experiences of Sikh militancy are minimal.  I did see camouflaged Indian tanks parked in fields in the Punjab and I was searched at gunpoint in the same area at the time (…they were looking for guns… in my backpack).  I was also stranded at one stage in a small town in the Himalayas as there were no buses going through a largish bus station due to some bomb blasts.  I was there as I was heading back to Delhi after a very enjoyable visit to Kashmir (…it was the year before that began to boil over).
Anyway, I mention all of this as these experiences are the reasons why I pick up a book like this one.  I see the words “Sikh” and “Struggle” and I know this does not refer to the tying of a perfect turban… although I have seen a Sikh struggle with a turban.  I guess this is all part of the knowledge that goes into picking out books and it’s something only experience can explain.
*Every Rock, Every Hill: The Plain Tale of the North-West Frontier and Afghanistan by Victoria Schofield.
**They assassinated her.
Posted by robin at 10:25 PM