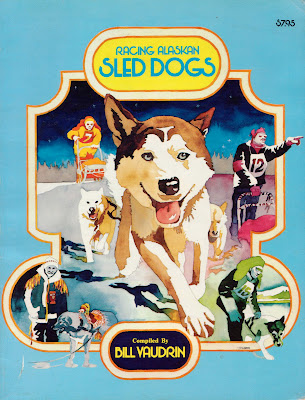 Alaskan Sled Dogs… no, I haven’t seen any recently.   Actually now that I think about it, I haven’t seen any sleds with dogs going past my window.  We get very little snow here in Clunes (none in the last 2 years) although my pipes have frozen twice*… yes, it does get cold enough, but no snow.  So this book probably has very little appeal to any of the locals here in sunny Clunes.  Indeed you may wonder if anyone here in Australia has any interest in Sled Dog racing.  A quick look at the interwebs and I discovered this:  http://www.sasleddog.com/gallery/1280.html  …although it looks like they are actually bike dogs as I can’t really see anything that looks vaguely like a sled except the three wheeled thingy.  To be honest, I do know someone else who’s interested in Sled Dogs, so obviously it’s not an uncommon interest here in Australia.  This all goes to show you that there is an interest in the whole exercise of a dog pulling something along.
This book is 25 years old.  Sometimes information can become a little dated in older books particularly in the case of instructional works such as this one.  In this instance though, I can’t imagine that there has been much change in putting a dog in front of sled (or bike) and yelling “Mush”.
*Not my personal pipes… the water pipes in my house.
Posted by robin at 1:49 AM