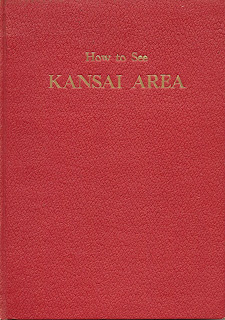 The key to what is of interest about this book, is a slip of paper that the publisher has stuck onto one of the last pages.  Right at the bottom it reads “Printed in Occupied Japan, 1949”.  The end of the Second World War was only a few years before and Japan would have been in the midst of recovery and rebuilding.  Yet there was a Japan Travel Bureau in 1949 that considered an English language guide book important enough to publish. Why?  At a guess I reckon that all of those US (and other) soldiers that were part of the occupying forces until 1952, needed a hand and some advice with getting around the Kansai area… or maybe the broader tourist industry had already reignited by 1949… I think English speaking soldiers is a better guess.  (Check out this video footage from 1946)
The descriptions are very matter of fact and to the point which I guess is what most of us want in a guide book… no waffling on, just the hard facts.  There are black and white photographs and there are numerous maps throughout the book.  The photos are not of a high quality, but there is a certain charm and beauty to the maps (Huc & Gabet opinion). 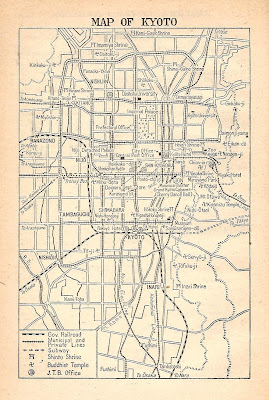 One thing that I particularly like is the small amount of advertising in the back.  Obviously the JTB subsidized the publication with the advertising. 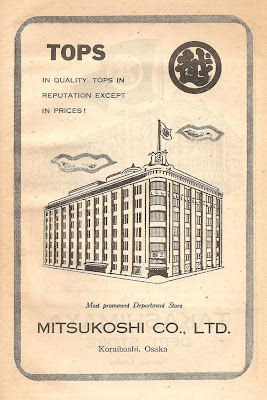 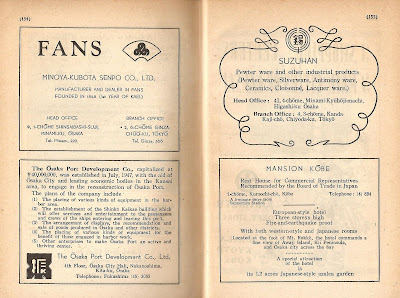 This particular copy has only slight wear to the cover including some fading to the spine and back cover.  The paper stock reminds me of many European War and Post War publications (Austerity Publications?) that were obviously printed on cheaper paper and over the past 62 years have noticeably yellowed.  Looking at the condition of the cover and the pages, my guess is that this guide book was never used.  There’s something a little sad about a guide book that has sat on the shelf for 62 years and never been dragged around the sites… or maybe this is just my opinion on guide books.  I look at them as tools to be read and used… and used hard.  There are people who collect vintage travel guides, generally a little older than this one (that’s the books… not the people).  To be honest I’ve collected a few myself… but I wouldn’t consider myself a “collector”.
Finally, something to think about.  If Japan was able to get their tourist industry going so quickly after a war, how long till we are booking holidays in Afghanistan?  (I’ve got a guide book if you need one).
Posted by robin at 1:16 AM