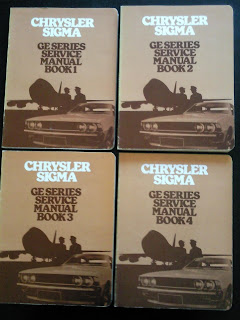 A wonky photo, taken on my phone.
A service manual for a Chrysler Sigma… now that’s interesting… OK, maybe it’s not interesting to you or I… unless of course “you” are the owner of a Chrysler Sigma, in which case this is a VERY interesting set of books… particularly if your Chrysler Sigma is in need of repair.
Car manuals… are they a can of worms?  Overall I’m of the opinion that they are worth a go on ebay.  Some manuals are worth $$$ (like this one) and some aren’t.  Some are keenly sought after and some aren’t.  To be blunt about it, some sell and some don’t, but overall I have had enough success to warrant listing more.  So I tend to list as many as I can find and always with a “buy it now option”.  I figure that if you need a car manual, you probably need it now and not in 10 days time at the end of an auction.
These books often have marks… greasy finger marks that is, which is something that on any other type of book, is not really acceptable.  Car manuals are generally used as working tools and most people don’t seem bothered by the marks probably because they are wanting to put their own greasy fingers all over them.  This set overall is in pretty clean condition.
So what happens to the manuals that I don’t sell on ebay?  Well I do sell some of my unsold stock to another book dealer who has a large selection/collection of car manuals for sale.  Recently I was at his shop when a young lady (one of many) discovered the manuals whilst browsing his stock.  She immediately called her boyfriend (a car mechanic) and on his advice bought a half dozen manuals.  I guess the large selection was too much of a temptation. 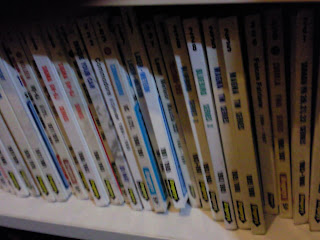 Another wonky photo, taken on my phone.
But this particular set will not be sitting on his shelf.  I have decided to keep this one and list it on Books & Collectibles.  I haven’t got any other car manuals listed and I’m sort of interested in seeing how well this one does.
Posted by robin at 3:03 PM