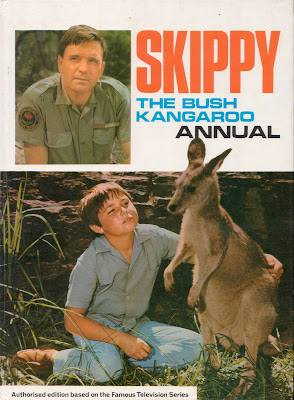 Now that you’re all in the mood… Skippy The Bush Kangaroo, not to be confused with any of the other Skippys like Skippy The Urban Kangaroo or Skippy The Outback Kangaroo or Skippy The Squished Kangaroo (lying on the side of the road collecting flies), is a true Aussie icon.  Who doesn’t remember Skippy?  Who doesn’t remember the song ? (…I wish I didn’t and now that I’ve reminded you, I bet you wish you didn’t).  OK, if you weren’t living in Australia or weren’t born at the time there is a chance that you won’t have heard of this… although the TV series was shown in over 80 countries and I’m pretty certain that it was, and is, oft repeated worldwide.  Lets face it, Osama Bin Laden probably watched Skippy. 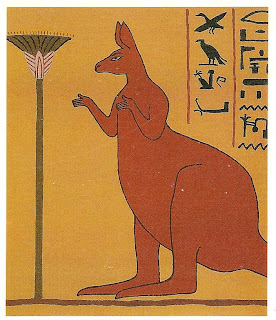 (From an early Egyptian translation of Skippy The Bush Kangaroo Annual... or maybe not.)

The book doesn’t contain any photographs other than those on the cover.  It does have illustrations throughout and the contents are the usual “Annual” type affair with, stories, games, bits of information etc.  My favourite bit is actually on the front cover. “Authorised edition based on the Famous Television Series.” “Authorised edition” makes me wonder how much unauthorised Skippy there was/is.  In 2008 Tony Bonner (one of the actors… but not a Kangaroo) sued the company that has the rights for Skippy as they were still raking in the cash… I guess this was all about “unauthorised”.  Of course the Kangaroos and their descendents haven’t received any royalties either (I haven’t fact checked this) and to top it all off their National Park has been actively sought after by housing developers and they were all removed in August 2009 (this is true)… I wonder how “authorised” that was*.

... anyway, this is a perfect way to relive those happier Skippy times.

*This did receive a bit of Media attention at the time.
Posted by robin at 2:14 PM