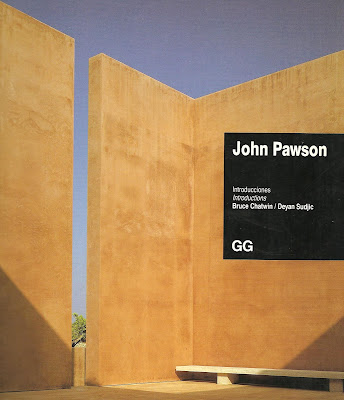 I’ve now had this book for a few years.  I originally decided, after a failed ebay attempt, that rather than selling the book cheap to another book dealer, I would keep it for the future.  What that future would be, I had no idea at the time… but here we are and it’s now the future.  The reason I wanted to keep the book, was that I felt that it was something special and those of you who know John Pawsons work will know what I’m talking about.  In other words, I like the book.
Wikipedia:
“John Pawson (born 6 May 1949) is a British designer associated with the minimalist aesthetic.”
There is a little bit more information in Wiki but not much… it’s very minimal.  Even the title of this book is… minimal.  When I found this book I had no idea who this guy was, my knowledge was… minimal.  I liked the cover… it’s minimal, and you know “you can always tell a book by it’s cover”… or something like that….  It’s got great photographs and illustrations of… minimal designs.
The book has a gift inscription signed by “John”.  Not uncommon for his books, but still a nice touch.  The www lists the book as worth a bit… which is another reason I didn’t want to sell it off cheap.  I’ve now listed the book on Books & Collectibles… lets face it, it has more of a chance of selling there, than in a box under my desk where the chance of selling it are… minimal.
So since my failed ebay attempt those few years ago, I do wonder if there is much interest in John Pawson now… or is interest…
Posted by robin at 7:43 PM