Hello everybody.  It’s over.  Clunes Booktown 2011 has finally passed.
The Sunday ended up being exactly as I (and others) theorized… that is, more people visited on the Sunday than in previous years due to the better weather and possibly to meet and hear some of the guest speakers.  My sales figures overall were 35% up on last year (2010) which was down by 20% on the year before (2009).  This is great news (the 35% up, not the 20% down).  I sold 1/3 of my stock.
I didn’t manage to take many photos in the end.  I visited some other book dealers that I know and asked if I could take a photo and some said yes, but a few did not want themselves in the photos.  This happened more than once… I guess we Booksellers are the quiet types who don’t like the attention… or we think the camera will steal our souls… not sure, but in their defence I will add that there are no photos of me here either. 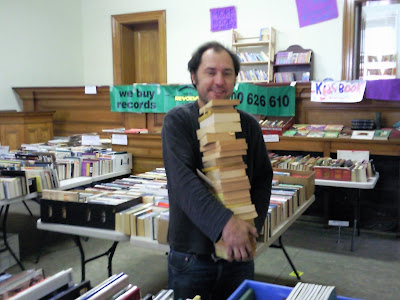 Firstly, this is Jon from Revolve Records in Sydney… yes they sell books as well.  This is the second year that he has had the stall next to me and I’m looking forward to being his neighbour again next year.  A very agreeable person.  He had a number of trestle tables full of $2 books… this is a picture of him on his way to putting more $2 books on the trestles.  Your probably thinking how cheap this is.  Well the truth is that the books he was selling for $2 were not books that I would even begin to look at (they didn’t meet the “of interest” criteria)… I think most people were being ripped off at $2… but that’s just my opinion and the truth is that they sold very well, probably because they were $2 and not because they were any good.  He had a heap of great books ("of interest") at heftier prices as well. 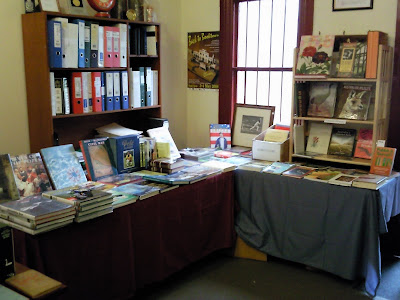 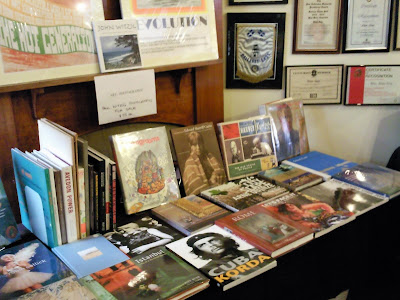 This is a few photographs of Sainbury’s stall.  Unfortunately it doesn’t really give a good idea of what they had.  I can tell you that they also had a trestle table outside on the street with some competitive pricing (this means cheap).  From what I can gather, they were happy with the weekend sales. 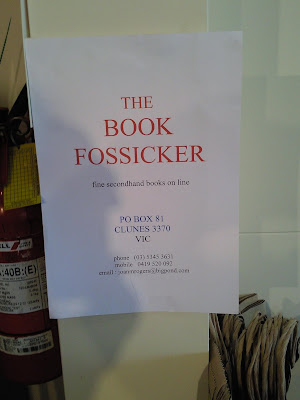 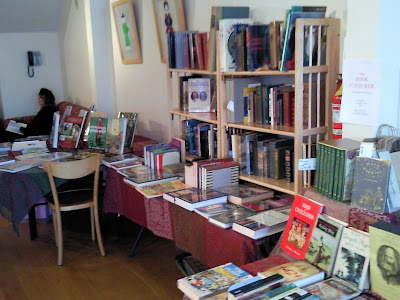 Book Fossiker is owned and run by Joan Rogers who also sells on line and also lives here in Clunes.  She was very helpful in giving me some advice and tips when I was setting up my Books & Collectibles account.  She had some lovely books.  The green box to the right in this picture was a set of Narnia books published by the folio society… they looked amazing and were also $$$. 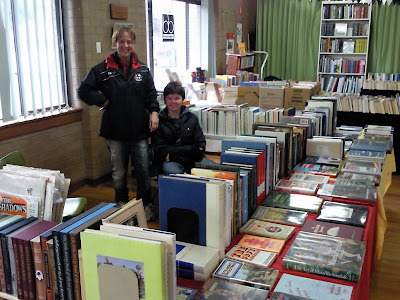 Flinders books.  The lady is Hilde and that’s her son Sullivan.  I met them the night before at the booksellers dinner… yes there was a booksellers dinner that I haven’t written about, imagine a room full of book dealers eating and chatting… it was very enjoyable (really).  Anyway I met these 2 as well as a heap of other booksellers from all over Australia.  In the background of this photo you can see some of the Brown and Bunting stall.  They weren’t there when I was taking my photos so I couldn’t ask if it was OK.

Anyway, it’s all over for another year.  I will be selling again next year.
Posted by robin at 3:36 AM