Recollections of a Bleeding Heart: A Portrait of Paul Keating PM by Don Watson.

Recollections of a Bleeding Heart: A Portrait of Paul Keating PM by Don Watson. Hardcover book published by Knopf 2002, 756 pages with a few black and white photographs. 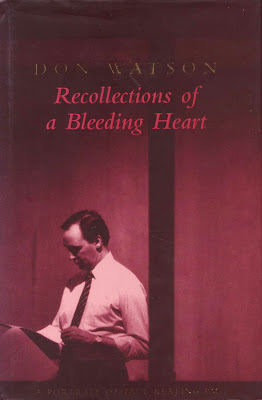 “IN JANUARY 1992, less than a month after Paul Keating became Prime Minister, Don Watson was employed as his speechwriter. Though trained in history rather than economics and generally regarded as a ‘bleeding heart liberal’, he became a close advisor and friend.”

This is the book that ended the camaraderie between Don and Paul.  Yep, Keating read it, had a few issues and that was it, it was over.  It had something to do with the Redfern Speech which to be honest, I can’t even remember.  Some of you may have gasped at my last sentence, the truth is that at the time I was not a fan of Keating and I had become so disillusioned with Australian Politics that I had withdrawn my interest.  In retrospect I think this was a mistake as I now perceive Keating as a clever man and certainly a man of interest… why else would someone write a musical about him.

Don Watson has written a number of books on a number of subjects.  I guess being a speech writer, is a good background to writing and if you’re remembered as having had a talent, well this can only help with any future sales of scribblings that you might make.  This book about his time with Keating is a well respected and much read political biography.  It’s a win win (win) book if you think about it.  It’s about an interesting prime minister, written by an insider, who is a writer… you can’t get any better than that.  Unlike John Howards recent rant (2010), this biography is not an easy secondhand find and I gather this has to do with the content and the reluctance of current owners to part with it.  Also of interest is that a few booksellers have asked me over recent months if I have a copy of the Watson/Keating book and no one has asked me about the Howard book.

Besides writing about his ex boss, Don also writes about the use of language… oh boy, I’m in trouble.
Posted by robin at 2:50 AM