Jack of Cape Grim: A Victorian Adventure by Jan Roberts. 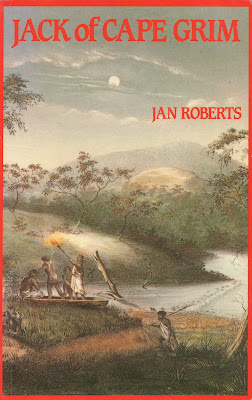 The first I heard of this title was from a good friend of mine who enthusiastically and adamantly recommended that I track it down and read it.  He claimed that the book is one of those books that sticks with you whether you want it to or not.  Sometimes these sort of recommendations go in one ear and out the other, but for some reason when I finally did stumble across this book about 18 months later, it did ring a bell.  I think it’s the title that stuck in my mind… the whole “Grim” thingy and also who is Jack?  Anyway, I finally found it and yes, read it I did.
The story is set in the mid 1800s Tasmania and Victoria and revolves around a group of Tasmanian Aboriginals (one of which was Jack) who were brought to Victoria to help ‘tame’ the natives there.  They of course arrive and as well as having numerous cultural differences, don’t even speak the same language.  They become pretty pissed off (although they were probably not very happy before their arrival as they had just come from Tasmania where…) and run away from their minders, grab some guns and start killing some of the early settlers here in Victoria.  They were caught and some of them executed.  This is an amazing story and what is even more amazing is that it is all true.
Eureka Stockade (1854) is often mentioned as being the first armed rebellion in Australia’s history yet here is a series of events that prove otherwise (1838).  These people (Jack, Truganini, Bob, Matilda and Fanny) openly rebelled against the state yet these events appear to have been hidden away in our history.  I don’t remember ever hearing about any of the events in this book before reading about it here, yet I know the Eureka Stockade story fairly well.  Interestingly Truganini is the Truganini that is often identified as the last "full blood" Tasmanian Aboriginal.
This story is incredibly powerful and incredibly sad.  My friend was right, it is a story that is not easily forgotten.  This is the third copy of this book that I have found over the years and I wouldn’t hesitate to pick up another copy.  I think everyone should read it.
Posted by robin at 1:35 AM