The Sea War in Bass Strait by Jack Loney.

The Sea War in Bass Strait by Jack Loney.  Paperback book published by Marine History Publications 1993, 71 pages with black and white photographs and a few black and white illustrations and maps. 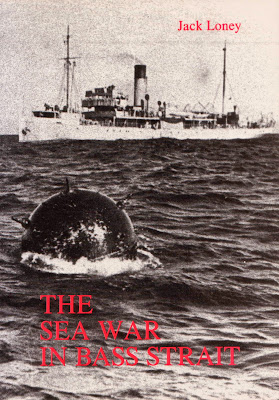 This is not the first time I’ve written in this blog about Mr Loney’s oeuvre and I’m sure it won’t be the last time I write about this prolific scribbler.  I love finding his books as they always seem to be about the same thing… OK, maybe not exactly the same thing, but rather, similar things particularly in relation to geography and theme (Maritime history off the coast of Victoria, Australia).

For some strange reason, I find this particular title, or rather the subject matter, a little peculiar.  I just can’t imagine a foreign country travelling all that way around the world and then along the coast of Australia or via Antarctica to attack or invade.  Can you imagine Adolf sitting around wondering how long until he would be able to taste some of that King Island cheese… maybe not.  But the proof is in the pudding, the Germans and the Japanese did venture down to Bass Strait and cause concern during the Second World War.  They were both obviously keen on a bit of Australia and what better place to get some than the bottom right hand corner.  Sure, the top bits and Perth may have been easier, but beautiful Victoria is what they were checking out.


This book although very specific in its content, has the ever popular themes of Maritime History, Australian History and WWII.  It’s bound to be a winner and with Jack Loney at the helm you can’t really go wrong.
Posted by robin at 1:03 AM