Brandt: The life of Brian by Faye Broberg

Brandt: The life of Brian by Faye Broberg, design by David Lancashire Design.  Paperback book no publisher listed 2005, 210 pages with black and white and colour photographs as well as a few illustrations. 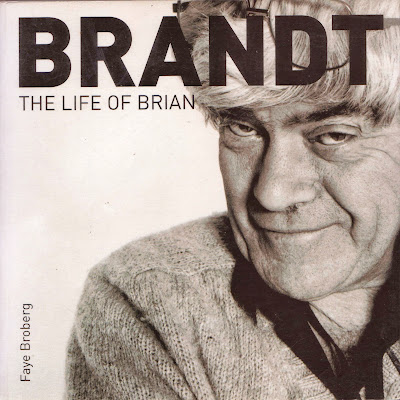 So who was Brian Brandt?

“BRIAN BRANDT WAS ONE OF AUSTRALIA’S MOST WIDELY PUBLISHED COMMERCIAL PHOTOGRAPHRS.”

I’ve never heard of him.

“MOST AUSTRALIANS THROUGHOUT THE FOUR DECADES, FROM THE FIFTIES TO THE NINETIES, WOULD HAVE SEEN HIS IMAGES ALMOST EVERYWHERE - IN AND ON THE COVERS OF WOMENS WEEKLY, WOMANS DAY AND MOST NEWSPAPERS
MAGAZINES, BILLBOARDS, ADVERTISEMENTS, POSTERS, CATALOGUES BOOKLETS, BROCHURES, PRODUCT PACKAGING AND WEBSITES.”


Nope, still never heard of him.  I’ve just flicked through the book looking for all those images that I’m supposed to have seen everywhere and none of them ring any bells.  They are nice though, and it looks like the guy worked for some big companies.  It must be me.  Maybe I don’t notice this stuff as much as I’m supposed to.  Maybe I’m Brian’s worst nightmare.

… except I did notice this book.  One of the things I can say about my hunting expeditions is that I tend to see many titles repeatedly, some titles occasionally and then there are those books that I have never seen before.  This was a “never seen before” and of interest enough for me to stop my speedy perusing and take a closer look.  It didn’t take long to figure out that this guy was an Australian photographer who worked in advertising and by all accounts, was incredibly successful.  My not being au fait with him or his work, was sort of irrelevant as advertising is obviously not one of my personal interests, but design, photography and advertising are of interest to many others and therefore despite having no idea about this guy, I took the plunge.

If you look the book up on the usual websites you’ll see that it is indeed quite rare… actually it’s very rare… OK, there are no other copies for sale at the moment anywhere*.  Amazing… and all because I had a gut feeling about this “never seen before”.  So how much is it worth?


*… that my humble interweb skills can find.
Posted by robin at 3:02 AM