The Sandman: Volume 5: A Game of You by Neil Gaiman.

The Sandman: Volume 5: A Game of You by Neil Gaiman.  Paperback book published by DC Comics 1993, 191 pages with colour illustrations throughout (graphic novel) as well as a few colour and black and white photographs. 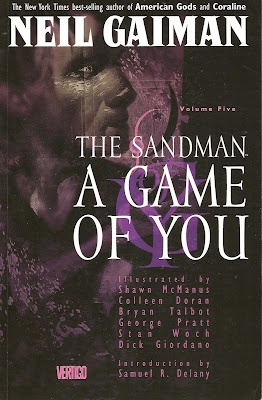 I was a fan… I’d even go so far as to say, I am still a fan of The Sandman, this is despite not having read it in over 20 years.  20 years!!!  I am getting old.  Most people read this in their teens and young adulthood, yet I haven’t read this in more than 1 batch of teens growing up with The Sandman.  So who and what is the Sandman? 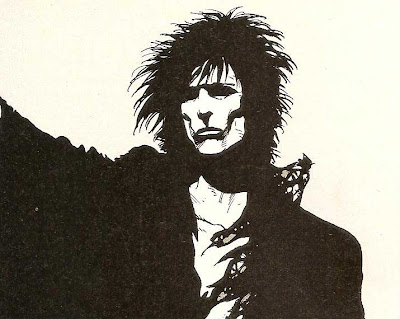 The Sandman is the guy who rules over the world of dreams.  More importantly though he is a fictional character in the comic/graphic novels written by Neil Gaiman of which this is one of the graphic novels.  From memory Mr Sandman seems to float in and out of most of the stories which are separate from each other.  This means that each of the books, which are collections of the original comics, is a complete story unto itself.  I also remember he had a sister named Death, who not surprisingly (she is Death) looks a lot like a generic goth.  She also floated in out of the stories.

Back in the day, I enjoyed reading the comics as they came out and keenly awaited the arrival of each issue.  They were imported copies and from memory were air freighted to Australia from the US.  They were intelligently written and were definitely engaging on many levels which I think is what appealed to me at the time.  Apparently I wasn’t alone in my keenness and even Norman Mailer was quoted as saying it was "a comic strip for intellectuals."*  Surprisingly, unlike many other graphic novels and comics, there has been no film adaptation as of yet.  I write this as it seems to me that they make everything else into a movie, so why not The Sandman?

When I first started selling books on line, I had a good look at what I had in my own collections that I no longer “needed” to have and found my pile of dusty Sandman comics.  I made the decision to move them on, not out of dislike or lack of interest, but more as a space and money making exercise.  They did sell and I did make some money.  I don’t regret selling them as I figure anyone that bought them would be a fan and realistically they were only gathering dust at my place, so it was time that they gathered dust at someone else’s place**.  I have other books and things that also gather dust which I haven’t moved on… which I don’t have any plans on selling at the moment, but you never know. It would be nice to sell this book before it also gathers too much dust... or am i just dreaming.