The Honey Flora of Victoria.

The Honey Flora of Victoria. Paperback book published by Department of Agriculture Victoria Australia 1949 (fifth edition), 136 pages with black and white illustrations as well as some black and white photographs. 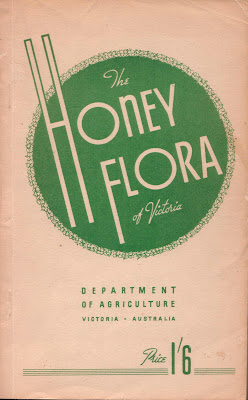 Whilst writing about poultry books a few months back, I briefly mentioned that Bee Keeping books are another one of those subjects (like Poultry) that is often asked for in the second hand book trade… at least that’s what happens here in Clunes.  This book has nothing to do with the keeping of bees.  It is though, a book that bee keepers here in Victoria all want, as even a complete bee novice such as myself, knows that without good flora, there ain’t no good honey.  The book isn’t cheap, but as we all know, no money, no honey.

The book contains descriptions of Victorian trees, blossoms and the honey produced thereof, which is very handy if you’re a Victorian bee keeper (or a bee)… which is the whole point of the book.  Despite being written for Victorian bee keepers, I’m fairly sure our neighbouring states would also get some use out of the book.  This was the fifth edition which probably indicates that the book was popular at the time.  From what I can gather, it’s still popular despite being vintage and now long out of print… actually, it’s not “out of print” as such, as earlier editions are now available as “Print on Demand”.

Recently, I was once again asked for any bee books and fortunately was able to pull this particular title off the shelf.  Unfortunately the inquirer already had this one, which is great for the inquirer… but isn’t great for the Huc & Gabet bank balance.  I guess this sale just wasn’t meant to bee.
Posted by robin at 12:40 AM