Marked for Misfortune: An epic tale of shipwreck, human endeavour and rescue in the age of sail by Jean Hood.

Marked for Misfortune: An epic tale of shipwreck, human endeavour and rescue in the age of sail by Jean Hood.  Hardcover book published by Conway Maritime Press 2003, 288 pages with a few black and white illustrations and photographs. 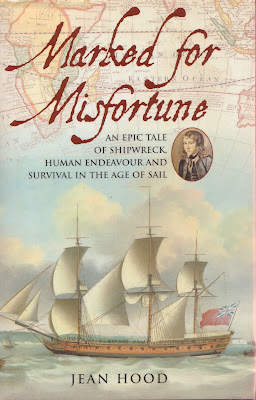 No. I have never been shipwrecked… well not physically, but the poor people in this book were shipwrecked in Madagascar in the late 1700s whilst on their way to India.  I’ve read a few shipwreck sagas over the years and I’m happy to say that unlike the participants, I enjoy a good ship wreck story... as long as i'm not part of it.  I’ve always been amazed at the durability of those that survived and the efforts of those that didn’t.  First hand accounts of shipwrecks where no one survives are rare,* but I guess that’s what historians and authors are there for.

One of the shipwreck books I have read was about some Russians who were stranded somewhere near Spitsbergen for several years**.  There were there on a three hour tour… actually it was a scouting excursion to see how many seals (or something similar) they could find and kill… when their main ship sank.  If my memory is correct they had packed a lunch (or something similar) and that was it.  I don’t want to go into all the details as I am meant to be writing about a completely different book, but the author did make the point that these were not 21st century booksellers (or similar), but rather eighteenth century Russian sealers who had a fair level of skills that enabled them to survive for all those years in an unfriendly environment.


Unfortunately there weren’t any Russian sealers on the Winterton (the name of the ship that this book is about) and as the title suggests the passengers and crew were “Marked for Misfortune”.  Some of them did manage to survive and there was a hero which is always a good thing in a story such as this one.  There was also a lot grief and strife, including a war, before the survivors reached Calcutta.

As you can probably gather, I haven’t read this book.  But this is the sort of book that I would read if my reading stack wasn’t as unmanageable as it currently is.  I guess my pile of unread books is my own shipwreck. If this one were to join it, I don’t know if it would survive.


*Rocket science observation.
** Four Against the Arctic: Shipwrecked for Six Years at the Top of the World by David Roberts.