Kaikai Aniani: A Guide to Bush Foods Markets and Culinary Arts of Papua New Guinea by R. J. May.

Kaikai Aniani: A Guide to Bush Foods Markets and Culinary Arts of Papua New Guinea by R. J. May.  Hardcover book with pictorial boards published by Robert Brown and Associates 1984, 192 pages with colour photographs as well as a few sepia photographs and some black and white illustrations. 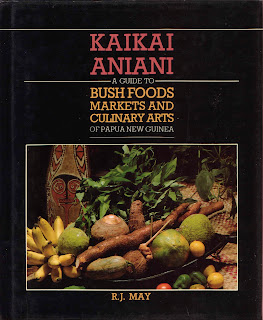 I like an unusual cookbook, something out of the ordinary… something of interest.  We all know what Jamie wants us to eat and yes I have become quite familiar with the food of Vietnam, Italy and France.  As the world gets smaller, it’s time to consider what’s left of world cuisine that hasn’t been plundered and repackaged for prime time television.  I don’t know if I would ever go so far as to eat raw seal liver (an inuit dish… although I don’t believe they use a dish) or drinking cows blood after a circumcision (…not sure if this is your own circumcision or someone elses… regardless, I don’t think I could do it), but I’m up for a challenge… within reason.  This book is less of a challenge than I originally anticipated and is filled with wonderful and tasty looking photographs, descriptions of food and easy to prepare recipes.

So what do the people of Papua New Guinea eat?  I have no idea.  A quick flick through and yes there are a few familiar ingredients such as sweet potato, banana, pig, mango etc etc, but there are just as many items that I have either barely heard of or have never heard of, most of them being bush foods.  There are also heaps of Asian fruits and vegetables which is really not that surprising considering where PNG is.  Like many indigenous people around the world, they do eat their fauna and the book does include recipes for Mumued Mumut (Bandicoot), Flying Fox with prunes and cream sauce, Baked Snake and of course the world wide culinary phenomenon known as Chicken Curry.  There’s a recipe for Margarita which I’m not so sure is traditional but in a tropical climate such as PNG, probably most appreciated.

It will be interesting to see if Gordon, Nigella, Heston etc ever make it to PNG, but in the meantime we have this book to enjoy.
Posted by robin at 12:57 AM