Poems of War and Peace by Jas H. Duke. 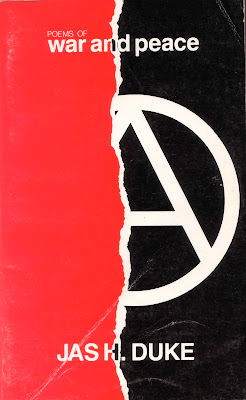 Ballarat born Jas H. Duke passed away in 1992 after having “a massive heart attack brought on by a broken bone that shattered when he slipped and fell over a concrete step”*.  He is probably the most well known Ballarat born Anarchist poet the world has even known, yet sadly there are no memorials to the man other than a few bits on the interwebs and of course a few books with this particular title being one of those books.  Interestingly Jas doesn’t get mentioned in the Ballarat Wikipedia entry in the section of Notable Persons, whereas some dodgy people do (politicians, clergy, sports people).  Reading through a few of the other “bits” on the interwebs, I particularly like this:

“He was initially influenced by R. Hausmann and K. Schwitters, but found Letraset (and similar products) to be a liberating force, one of anarchic dynamism.”*

I first encountered Jas’s oeuvre a few years ago at a friends house.  This particular friend is a massive fan and has amassed a comprehensive collection of Jas Duke’s works… which isn’t much… I think he has 2 books.  He often enjoys entertaining guests with readings from these works, which is how I know of Jas H. Duke.  A few weeks ago on the way to a book sale, I commented to this friend/Jas Duke fan/Huc & Gabet book finding assistant, that rather strangely I hadn’t found any Ballarat Anarchist poetry over the last few years.  Half an hour later he walks up to me and hands me this book.  I’m not sure why I thought of Jas as we were driving to this sale, it’s not something I normally think of… or want to think of.  Maybe it’s the beginning of my own “anarchic dynamism”.

*Jas H. Duke: A Biographical Sketch by thalia
Posted by robin at 1:25 AM