Trotsky: Downfall of a Revolutionary by Bertrand M. Patenaude.

Trotsky: Downfall of a Revolutionary by Bertrand M. Patenaude.  Hardcover book published by Harper 2009, 370 pages with a few black and white photographs. 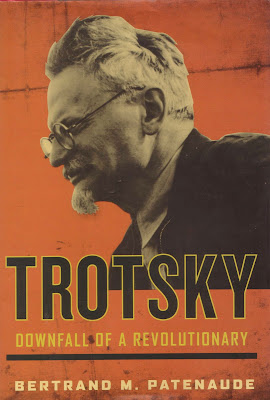 “Whatever happened to Leon Trotsky?
He got an ice pick
That made his ears burn”

“No more heroes” by the Stranglers.

I’m not sure if the ice pick actually did make Trotsky’s ears burn, but it certainly killed him.  To be honest, I don’t know that much about Trotsky.  I do know he was a Marxist revolutionary hero and theorist who fell out of favour with Joe Stalin and ended up in Mexico where someone in the employ of the NKVD stuck an ice pick in his head. This is of course not a very good thing and Leon died.  Stalin as we all know, was a difficult man to get along with and even if you went to the other side of the world, he didn’t forget a grudge and being the man of steel that he was… well let’s just say that Trotsky didn’t get far enough away from this bloke… particularly Joes ice pick wielding friend.

This book looks at a lot more than the murder of Mr Trotsky, but does mainly look at his time of exile in Mexico.  There’s only references to his earlier revolutionary career and I guess there’s lots of other books about the early years which does make this book stand out as being a bit unique in that it has a definite focus on a particular period of Trotsky’s life.

A number of years ago I read a biography of Stalin which I found to be very unsatisfying.  I kept on thinking that the author hadn’t gone into the subject hard enough and had skirted around some of the more controversial issues, and lets face it, when reading a biography of Stalin, you sort of expect there to be a bit of blood and guts.  At the end of reading this unsatisfying work, all I could think of was that I would like to read a more comprehensive biography of the man.  This book would probably not be a great place to start for a Trotsky novice such as myself, whereas Trotskyites would probably find this book most enlightening.  I’m interested in reading a good biography on the guy but once again I want all of the dirt, not just the later dirt.  I must mention this book to the next knowledgeable Trotskyite I bump into and see if they’re interested.
Posted by robin at 1:12 AM