Dr. Space: The Life of Wernher Von Braun by Bob Ward.  Hardcover book published by Naval Institute Press 2005, 282 pages with some black and white photographs and a few black and white illustrations. 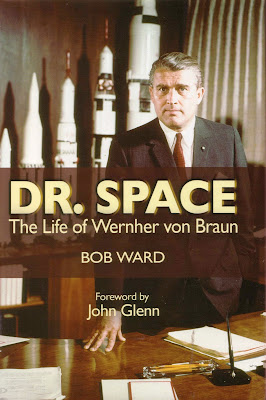 Rather than writing about Wernher, I’ll let the words of Tom Lehrer’s excellent song give you a little bit of the background:

This book has nothing to do with Tom Lehrer and everything to do with Wernher Von Braun.  Without Wernher we* possibly wouldn’t have made it to the Moon or Mars.  There’d probably be no GPS or advanced communication satellites.  There’d be no Star Wars (Strategic Defense Initiative) or maybe even no Star Wars (movie franchise… yes, you can blame Wernher for this as well).  So this guys influence is everywhere from kids toy boxes to Mars.  The book doesn’t go into the Star Wars stuff (both) or even much of the other stuff that happened after his death.  It does look at his time working with the Nazis and the development of the American Space Program afterwards... as well as the many questions that arose regarding these activities.

So who remembers Wernher now?  Well, I get the feeling not a lot of people.  I’ve had the book on ebay for a while now and there have been no takers as of yet.  I think it’s a pretty impressive book and, in some ways, an important story about an important guy… He must be important, even the great Tom Lehrer sang about him.