The Art of Bollywood: Cinema India by Divia Patel and Laurie Benson and Carol Cains.

The Art of Bollywood: Cinema India by Divia Patel and Laurie Benson and Carol Cains.  Paperback book published by Council of Trustees of the National Gallery Victoria 2007, 64 pages with colour illustrations and photographs throughout. 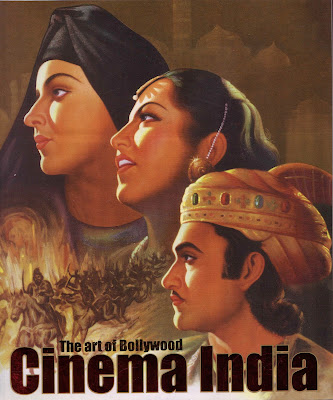 When it was first announced that this exhibition would be visiting Melbourne’s National Gallery, I felt great excitement at the prospect of one of my favourite Indian art forms visiting the Gallery.  No, I’m not talking about Bollywood films.  Bollywood is definitely not my thing.  After seeing a number of films over the years both here in Australia and in India, I can write without hesitation that I have absolutely no appreciation for Bollywood films.  What I do like is vintage Indian commercial art such as was represented in this exhibition…  I also have an appreciation for good Indian soundtracks/songs and especially film clips from the films, the ones that I don’t particularly like.  Here’s one of my favourites:

So the exhibition came and went, but unfortunately the anticipated mass of exhibition viewers did not.  I thoroughly enjoyed the exhibition at the time and in retrospect it was great, well worth the visit.  I think that the National Gallery may have been working on the assumption that Bollywood Cinema was gaining in popularity at the time, so an exhibition would be appropriate.  People are fickle and a taste in Indian singing and dancing, romantic, and romantic comedy, films doesn’t necessarily translate into an interest in mostly vintage Indian film posters.  The outcome of all this was that “one of my favourite Indian art forms” didn’t really go down that well here in Australia.*

Here we are 5 years later and I find a copy of the exhibition catalogue.  I seem to remember that there was another bulkier book on the same subject, possibly not directly associated with the exhibition, that was available at the time.  I would love to find that one… although I probably wouldn’t sell it if I did.  I don’t know that this book will sell very easily but you can only hope… and in the meantime, continue watching awesome Bollywood clips on You Tube

*All of this is based on a conversation I had with a friend with close ties to the administration of the National Gallery at the time
Posted by robin at 1:23 AM