The History of St. Kilda: From its First Settlement to a City and after 1840 to 1930 volume 1 by John Butler Cooper.

The History of St. Kilda: From its First Settlement to a City and after 1840 to 1930 volume 1 by John Butler Cooper.  Hardcover book (no dust jacket) published by Printers Propriety Limited 1931, 405 pages with some black and white photographs and illustrations as well as a few colour illustrations (one coloured photograph). 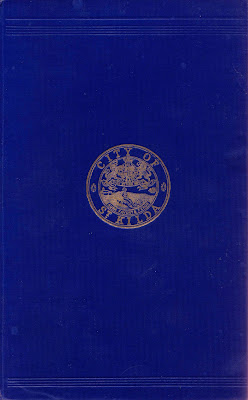 When I spotted this book I knew immediately what it was as I had seen a copy of it previously.  The weird thing is I can’t remember where I’ve seen it.  I know that I’ve never owned a copy before I bought this one and I’m fairly certain that I saw it for sale somewhere for big $$$, possibly at a rare book fair… in other words it was a book that has caught my eye previously… somewhere.  It’s fairly distinctive so it wasn’t hard to pick out from a shelf full of other books.  Here’s a dodgy photo of the spine which doesn’t really give a good indication of how easy this book is to spot… but maybe you can get the general idea: 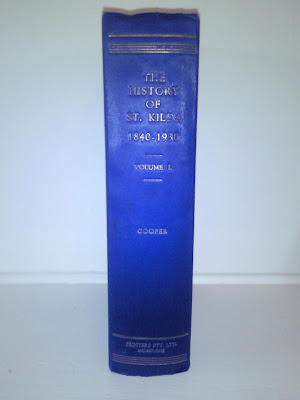 St Kilda is a suburb of Melbourne, Victoria and is probably one of it’s most well known suburbs both nationally and internationally for both the right and wrong reasons.  It’s also one of Melbourne’s oldest suburbs which makes this history “of interest”.  Particularly of interest are some of the early photographs… and I guess some of the later photographs as well, as the book was published in 1931 so everything in the book is now historic.

… and it’s volume 1 only.  Does this concern me?  No.  Yes, two volumes would have been nice, but this volume was a lone wolf and a vintage lone wolf at that.  It’s not as if it’s two volumes of a three volume set of Don Quixote (…currently sitting on my shelf with me not knowing what to do with them) and as a single volume it contains episodes of history as apposed to a continuous narrative (… like Don Quixote).  So I believe the book has a few things going for it which should help sell it despite being a single volume.
Posted by robin at 2:48 AM