Below and on Top by Edward Dyson.

Below and on Top by Edward Dyson.  Hardcover book (no dust jacket) published by George Robertson and Company 1898, 327 pages with black and white illustrations. 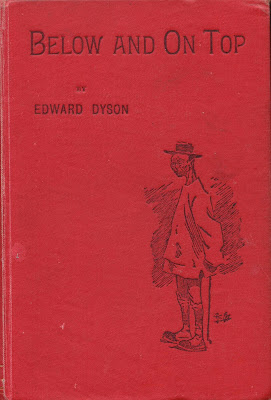 As a patriotic resident of Clunes, I think the most interesting thing about this book is that Dyson was born and grew up not far from where I now sit.  Apparently he worked here in Clunes and in a number of the other towns in the area, during his teens.  The “Below” in the title refers to mining and more than likely he was here in Clunes working in one of the gold mines… That’s not a definite as there were other jobs around here other than gold mining, but gold mining was an occupation that Edward did do for a while and gold mining was something that still happened in Clunes at the time he was here.

Apparently Dyson based a lot of the characters in his stories (this book is a collection of short stories) on childhood acquaintances and not having read the book, I can only wonder if any of the stories are based on people from Clunes.  I love the idea of this book being full of local character and interest, as other than the Lindsay family who were from Creswick (36km away) there aren’t that many local literary connections that  i'm aware of.  Dyson at some point did befriend the Lindsay’s, but I’m not sure if this friendship was something that began locally or was a later Melbourne thing.

There haven’t been any new editions of this book in the last one hundred and fifteen years, but it is currently available as a “Print on demand”.  For those of you who don’t know what this means, it’s a copy of the book cheaply printed and bound in a print run of one.  In other words, you order it, they print it and then they post it to you.  I find this interesting as for some strange reason I can’t imagine Below and on Top being a popular title or that people would be that interested in Edward Dyson.  On further reflection, I guess that’s why it’s print on demand.  If there’s no “demand”, there’s no “print”.  Maybe I’m wrong.  Maybe Dyson does have a cult following and there’s a photocopier/printer somewhere in the world, whipping up hundreds if not thousands of copies of this title as I write these observations.  Unfortunately none of these people have realized that they can get an original first edition from me… or maybe it’s the price difference that has deterred any budding buyer from forking out the big $$$, choosing instead to get a fresh copy whipped and shipped.
Posted by robin at 3:30 AM