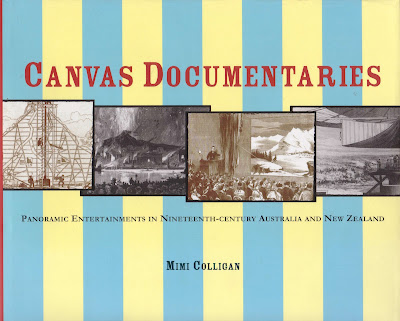 There was a time when there was no interwebs and no computers.  There were other things missing from peoples lives as well, like: television, mobile phones, CDs (remember those things that played music), DVDs and lots of other stuff that I could waffle on about for ages but will refrain from doing so now.   So what did people do for leisure?  Well sometimes they talked to each other, sometimes they read books (real books) and sometimes they did other things that didn’t involve any of those things I’ve mentioned.  This book looks at one of those other pastimes that people partook of in the eighteenth and nineteenth century which is the presentation of Panorama’s.  These were usually travelogues and comprised of back lighting on large illustrations with a running commentary and props (sand, plants, smoke).

So let me write that again.  A Panorama was a picture, or series of pictures, with some snappy lighting, some commentary and a bit of sand, a few bushes... maybe some smoke.  Sort of a bit like the interwebs, except the connection was very slow and copy protection was extreme. Another way of looking at is that it was the you tube of its day… except there wasn’t kittens inspired by kittens.

This book is a history of this pastime in Australia and has many wonderful illustrations and photographs (no kittens).  I guess for most of us (me) we have no idea how amazing this all could be... that is, a life without Kittens.
Posted by robin at 1:16 AM