Birds of Arid and Semi-Arid Tracts by Ajit Kumar Mukherjee. 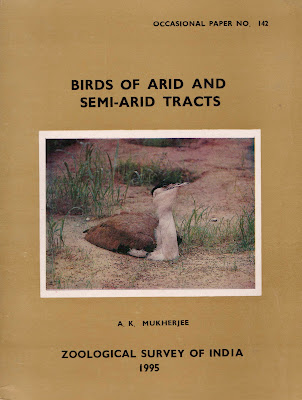 Firstly I want to let you know that Ornithology is not a pastime of mine.  I am happy to admit that I have a slight appreciation of birdlife and wildlife in general but this is a casual appreciation only.  Where I’m sitting now has an occasional view of some of our feathered friends (and even the occasional furred friend) and I do sometimes pause and observe, yet I would never consider myself a Twitcher.
Many years ago whilst backpacking through India, I met a pair of British women who were there for one thing and one thing only… bird watching.  They had met at a bird watching club and after a few years of joint twitching expeditions, had decided that India would be their next Ornithological conquest.  When I met them they weren’t watching anything, but they did assure me that they had been Twitching (I did observe binoculars and field guides) and were taking a break before heading home.  At the time I was impressed and I guess I’m still impressed with their passion and dedication for things feathered.
So here we are many years later and I stumble across this book and of course having an experience and understanding of those who Twitch in India, I’m happy to venture into the world of the Indian Bird Book, which you may have noticed doesn't indicate in the title that is about the birds of India... i assure you it is.  This book of course would be perfect for those two lovely ladies (Nicky and ?????) I met all those years ago… that is if they were going to Arid or Semi-Arid Tracts.  I can only assume that there are further volumes covering those non arid areas not covered by this volume, so maybe they would need more than the one book…. which starts to get a bit tricky if backpacking and trying to not carry too much around with you.  Hang on though, there were two of them.  They could carry one book each… unless of course there are more than two volumes in which case they may opt for the “Compact Handbook of the Birds of India and Pakistan: Together With Those of Bangladesh, Nepal, Bhutan, and Sri Lanka” published by Oxford University Press which is a single volume smaller book (…which is not a book that I’m selling).
This particular volume is an Indian publication which means that it has a certain feel, smell and overall impression that is hard to describe in a few words other than it’s an “Indian publication”.  The paper is pinkish in tone and the spine appears to be creased… but from experience this may not be the case, it just appears to be creased.  Interestingly there are very few photographs or illustrations in the book which I guess means it’s intended for the serious Ornithologist and not the casual Bird Watcher who wants to match up the pictures with what they see.
So this book should be of interest to all those Nicky’s and ????? heading to India and have the room for just that one more book… or two… or three.
Posted by robin at 1:30 AM