Garabandal: Apparitions of the Blessed Virgin Mary as "Our lady of Mount Carmel"

Garabandal: Apparitions of the Blessed Virgin Mary as "Our lady of Mount Carmel" 1 From beauty to truthfulness. More than 400 pictures testify in favor of a most important prophetic perspective for the good of all mankind as it advances in the Third Millennium by Jacques Serre and Beatrice Caux. Paperback book published in 2001. 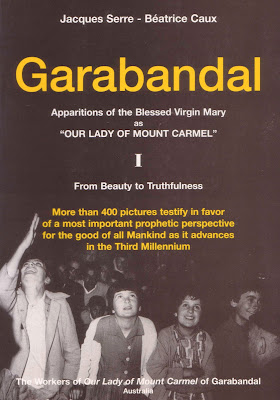 Garabandal is a small village in Spain.  So small that it was nearly forgotten, until 4 girls saw something there from 1961 to 1965.  Of course when you see “something”, everyone else wants to see it as well and Garabandal became a bit of a hot spot for the seeing of the girls… seeing.  They saw so much that it kept Kodak in business for many years, which is how a book like this one can be easily compiled after all this time.  The something they saw was not, or could not, be photographed… mmmmm… The photographs were all of the girls and the people watching the girls who were looking at the something.  The idea was/is that we can see that they are seeing something by their actions and the looks on their faces.  Here are a few of the photographs: 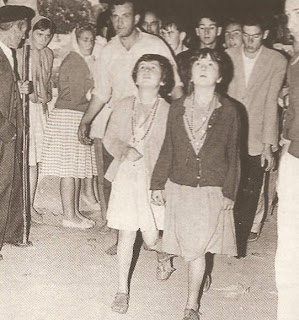 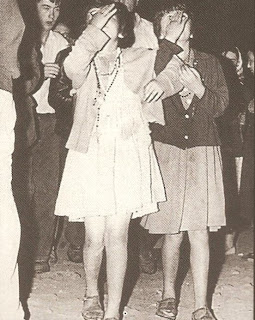 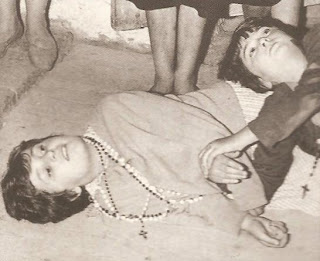 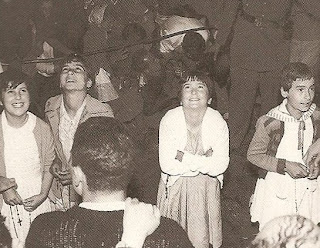 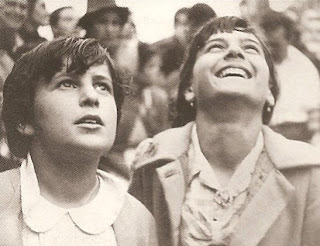 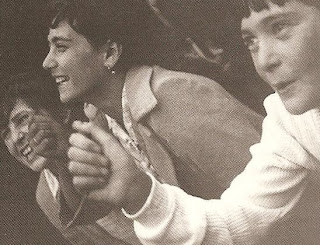 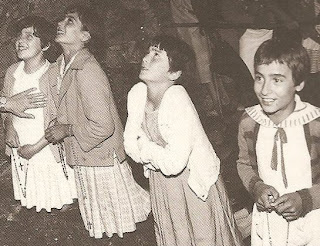 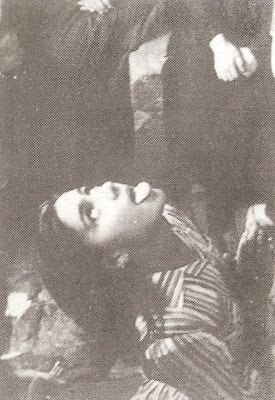 Except for this last picture they look like they were having fun.
There were messages as well. They didn’t just see stuff they were told stuff.
“We must make many sacrifices, perform much penance, and visit the Blessed Sacrament frequently. But first, we must lead good lives. If we do not, a chastisement will befall us. The cup is already filling up, and if we do not change, a very great chastisement will come upon us.”
“As my Message of the 18th of October has not been complied with, and as it has not been made known to the world, I am telling you that this is the last one. Previously, the Cup was filling; now, it is brimming over. Many priests are following the road to perdition, and with them they are taking many more souls. Ever less importance is being given to the Holy Eucharist. We should turn the wrath of God away from us by our own efforts. If you ask His forgiveness with a sincere heart. He will pardon you. I, your Mother, through the intercession of St. Michael the Archangel, wish to tell you that you should make amends. You are now being given the last warnings. I love you very much, and I do not want your condemnation. Ask Us sincerely and We shall grant your plea. You must make more sacrifices. Reflect on the Passion of Jesus.”
Wow. There’s some pretty powerful messages in there and there have been many interpretations over the years as to what this all means.  The Catholic Church remains a little ambiguous about the whole thing yet many Catholics (others as well) still flock to Garabandal possibly in the hope of reliving some of the seeing of things and message receiving and this is despite the fact that the Catholic Church doesn’t in this instance, sanction or approve of such behaviour.  I guess reading between the lines they don’t want people’s attention to be brought to Priests “following the road to perdition”…
I like this book, it just all seems so strange and bizarre.  I particularly like the fact that this is an Australian edition of a French book about something that took place in Spain in the 1960s.  People have obviously not forgotten the 4 girls and the people that saw them seeing something… or maybe they have forgotten and that’s where this book comes into the picture.
Posted by robin at 11:42 PM