The Hardy Boys (and the mystery of the lack of sales). 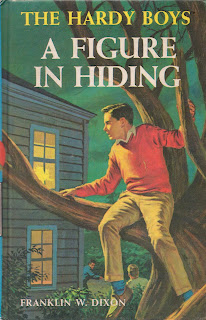 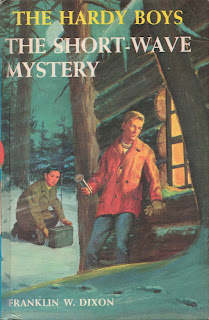 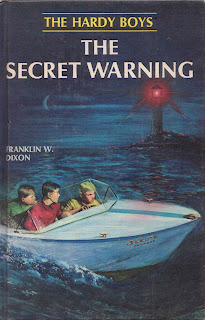 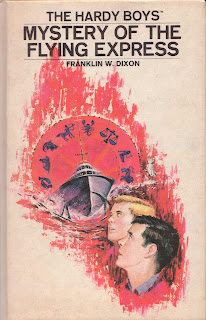 I thought the Hardy Boys were popular. Or at least had a cult following… you know… some nostalgia value at least.  I’ve just listed 4 titles on eBay for the second time after a failed first attempt.  The first time around there was very little interest… OK… no interest, which equals no sales.  I’m having difficulty understanding this strange occurrence.
The 4 books were published by Collins in 1980 and are all uniform hardcover editions... except that the authors name is not always in the same position on the spine . They have some wear but overall I think they are still in reasonably good condition. 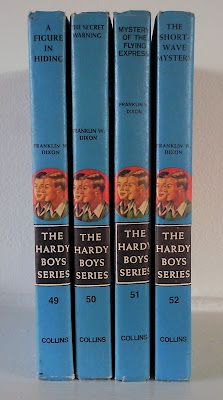 Maybe everyone’s forgotten the 2 boy detectives who were always on the go and partook in the solving of mysteries.  I personally would possibly have forgotten about them if I hadn’t found some of their books.  Saying that I’m not completely an ignoramus in regards to The Hardy Boys… I did read one once… It was a long long time ago and I don’t really remember any of the details (… this is a bad sign… if I have no nostalgia, why would anyone else?).
One of things I do remember about the Hardy Boys books is that they have been rewritten over the years.  This was done to modernize the story lines and content often changing things in a way that was more palatable (eg. less racist) for the audiences at the time of publication.  And how does Franklin W. Dixon feel about this?  Franklin doesn’t care because Franklin doesn’t exist.  All of the Hardy Boys stories were ghost written by various authors as were the Nancy Drew books.  Both the Hardys and Nancy were created by Edward Stratemeyer, an American publisher, who didn’t have time to write them as he was busy writing another 1,300 books and selling over 500,000,000 books (… not sure if this includes The Hardy Boys).  500,000,000... that’s a lot of books.  That’s a lot of Hardy Boys.
So possibly there are a few million copies of these books floating around and maybe that’s the answer to the mystery of why my 4 Hardy Boys books haven’t sold.
Posted by robin at 2:18 PM