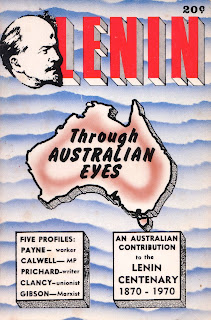 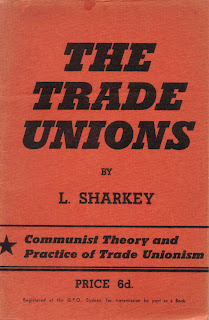 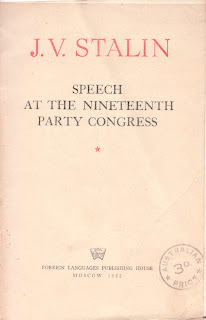 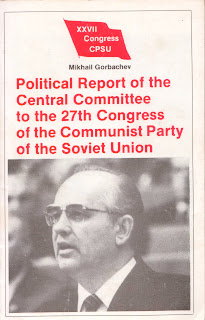 Greetings comrades.
4 pamphlets of communist theory/propaganda/comment etc etc.  I love this stuff, but I have been finding less of it on my recent journeys.  Victoria is no longer the hotbed of red that it once was and these fiery little political manifestos of classless stateless sociopolitics, appear to have not lasted the distance.  Possibly the format hasn’t helped the longevity of these revolutionary tomes as they were often cheaply printed and sold(?) as stapled booklets… as these examples demonstrate.  Affordable and portable, within the grasp of the proletariat, these booklets were intended to be easily carried and read until they fell apart, or were passed to another comrade, or were discarded… well that was the idea.  Sometimes the content dated quickly and discarding the booklet would probably have been a quick solution to an awkward situation (think Comrade Stalin).  All of this leads to a scarcity of this subject matter in this format… and all of this leads to just another Huc & Gabet theory.
I bought these pamphlets and a few other bits from an antique dealer/junk seller who tends to sell large amounts of items/junk at great prices (sort of a middleman between the original owner and me).  This dealer/junk seller is a great salesman and he tends to be very vocal and flamboyant and is always eager to share a quick comment or story… which he did when I bought these items from him.  He bought these books with a whole heap of other “junk” from an elderly man with a thick Balkan accent.  When the dealer/junk seller noticed these booklets he made some throwaway comment (probably a bit sarcastic), which the owner picked up on and replied with the question “Are you one of us?”  Well comrades, this is the big question…
The East German FDJ (Freie Deutsche Jugend (Free German Youth)), was the official socialist youth movement of the German Democratic Republic and they had a particularly memorable (grim) song entitled Sag mir wo du stehst.  The chorus goes:
“Sag mir wo du stehst
Und welchen Weg du gehst!”
(Loosely translated as: Tell me where you stand, And which way you go!)
Why am I comparing a comment made to someone in 2011 to a vintage East German propaganda tune from 1967?  Well here we are in Victoria, Australia and the question after 44 years is basically the same (?), “Are you one of us?”  “Us”!!!  Who are “Us”?  I wrote earlier in this piece that “Victoria is no longer the hotbed of red”, but this elderly gentleman is obviously a comrade and still very much alive, here in Victoria in 2011 and he is obviously not alone (“us”) or is he one of the last true believers, either way I now have a few of his treasured booklets.
Posted by robin at 4:33 PM