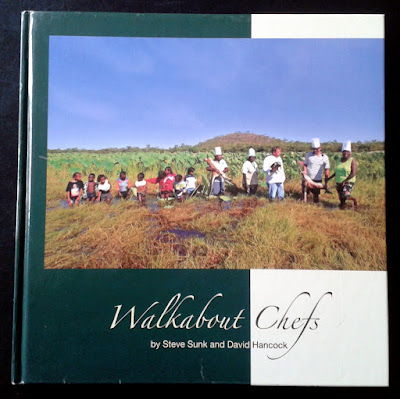 “From the mangroves and beaches of Arnhem Land to the arid lands around Alice Springs, Steve Sunk has taught cookery in many Aboriginal communities. In Walkabout Chefs, Steve and photojournalist David Hancock have collaborated with Aboriginal cooks to produce a volume of truly unique Australian cuisine with ingredients that have been used for thousands of years. This is not just a book about cooking, but an insight into Australian Aboriginal culture through food, country and humour.”

When I recently espied this book sitting half hidden on a shelf, I somehow knew it was something special... and that was before I starting flicking through the pages. The title was enough to get me to pick it up and then there's the photo on the cover showing chefs with Kangaroos (dead) and lots of children (alive) which are good indicators that there is something of interest going on between these covers. And when I stumbled upon the Dugong Steaks with Bush Fruits recipe whilst perusing the pages, my suspicions were confirmed. This book is truly out of the ordinary. 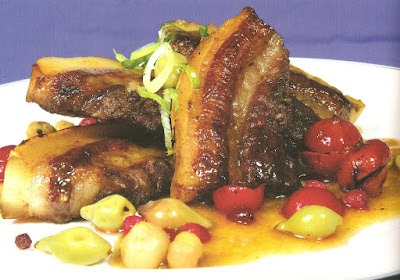 So where am I going to get some Dugong? It's not something that I have ever seen at Aldi... maybe I should out check the freezer section, they've got all sorts of stuff in there.* Sure, the Dugong recipe does offer alternatives (pork or chicken... both available at Aldi) as does the Sea Turtle Panfried in Wild Pepper Berry (fillet steak or chicken), but you know what, if you're going to cook something like Dugong of Turtle, you probably want Dugong or Turtle in the dish. So maybe I need to NOT cook these dishes from this book (… i just heard a Dugong and Turtle massive sigh of relief). Wallaby is a better option and there are quite a few around here (Clunes)... or rather there were up until I wrote about wanting to eat them.

This is a beautiful book which is not just a cookbook but is about “Australian Aboriginal culture through food, country and humour” with an emphasis on Gourmet tastes and experiences. I don't know if I would eat Dugong or Turtle**, but there are heaps of other things in this book that I would certainly like to have a taste of. Overall though, I think this book is more about ideas and experiences rather than filling bellies. Bon apetit.

*http://www.environment.gov.au/marine/marine-species/dugongs
In Australia, dugongs are protected under the Australian Government's Environment Protection and Biodiversity Act 1999 (EPBC Act), which lists them as marine and migratory species, and various State and Northern Territory legislation.
Dugongs are an integral part of the traditional culture of many coastal indigenous peoples throughout the world. Dugongs may be legally hunted by Aboriginal and Torres Strait Islander people under section 211 of the Native Title Act 1993 for personal, domestic or non commercial communal needs.
**... I probably would... as long as it was legal.
Posted by robin at 1:08 AM